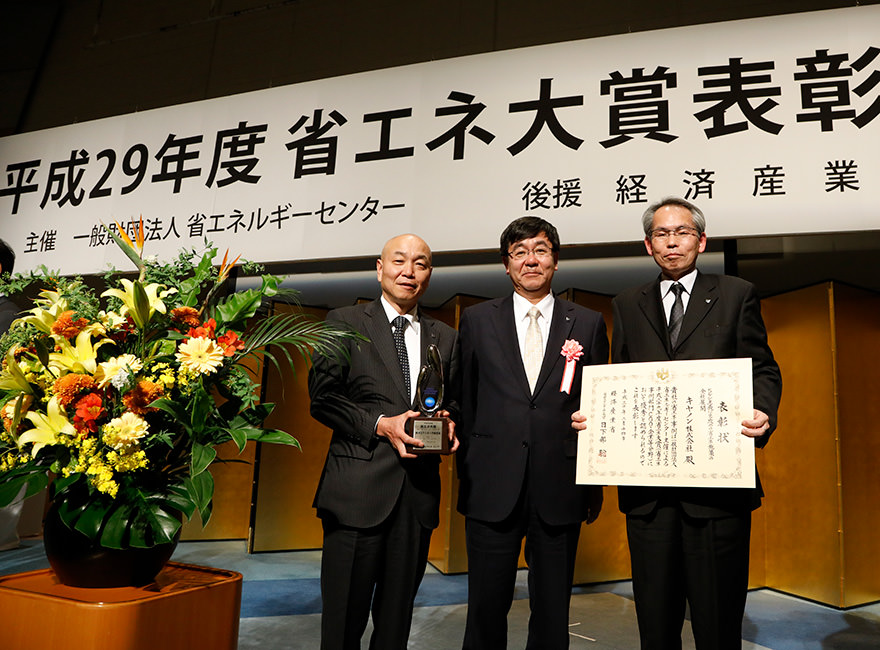 Canon took on the reduction of energy consumption as a major challenge and began a Group-wide energy-reduction program in 2014, with an initial focus on domestic production sites.

Officials started by visiting sites “genba” — the starting point of the 5Gs — and ascertained and shared energy consumption conditions at production sites. After this, Canon identified the required operating conditions of every one of our roughly 6,000 pieces of production equipment and revised operating settings found to be excessive for such things as compressed air, coolant, and air-conditioning. And in 2015, Canon launched the Energy Conservation Diagnosis Team, which brought together people with specialized energy-conservation skills. The Team started giving directions on energy conservation, such as boosting the operating efficiencies of equipment and devices and providing on-site training.

These activities were then rolled out throughout the Canon Group, including development departments and overseas production sites. Over 3,000 energy-conservation improvement measures have been implemented over three years (2014 to 2016) since the start of the program. The program has achieved a reduction in energy consumption of about 40,000 kiloliters (in crude-oil equivalent), which is about three percent of Canon’s planned annual energy consumption.

Canon received this award in recognition of this excellent initiative, which serves as a model for other companies.