Combining chromatic aberration-correction capabilities surpassing those of fluorite lenses with aspherical-optical characteristics, Canon’s DO lens effectively suppresses the chromatic and other optical aberrations that frequently occur in telephoto lenses while contributing to the realization of a lens that is compact and light in weight.
The new EF400mm f/4 DO IS II USM incorporates ground aspherical and UD (Ultra-low Dispersion) lens elements that enable it to achieve a level of imaging performance that exceeds Canon’s previous-generation EF400mm f/4 DO IS USM, which was released in December 2001. The new model’s dual-layer DO lens reduces the occurrence of ring-shaped flaring* caused by bright light sources to approximately one-fourth the level of the earlier model. Furthermore, because the DO lens’s placement is in a position where it is not subject to exposure from light sources located outside of the image frame, the new super-telephoto lens also reduces the occurrence of backlight flaring.

* Flaring, which can result in visible artifacts or a haze across the image, is caused by the reflective scattering of light inside of the camera or its lens. 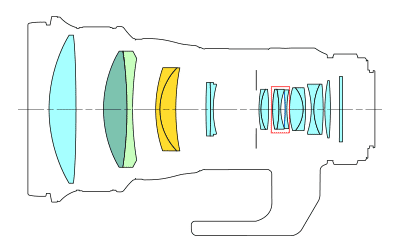