Successor to the EF-S18-135mm f/3.5-5.6 IS STM (released in June 2012), the EF-S18-135mm f/3.5-5.6 IS USM realizes improved AF speeds thanks to its newly developed Nano USM, which enables up to an approximately 4.3 times* increase in the driving speed of the focusing lens compared with the earlier model. The Nano USM is the latest advancement in ultra-sonic motor technology, which Canon first applied as a camera lens motor in the Company’s interchangeable lenses in 1987.

Thanks to its Nano USM, Canon’s EF-S18-135mm f/3.5-5.6 IS USM achieves a greatly increased focus lens driving speed while shooting still images and, like its predecessor, realizes exceptionally quiet and smooth AF operation when recording video. Adopting the same acclaimed optical system as its predecessor, which incorporates a UD (ultra-low dispersion) lens and an aspherical lens, the EF-S18-135mm f/3.5-5.6 IS USM delivers enhanced correction for various aberrations to achieve high image quality.

* Driving speed from minimum optical distance to infinity when shooting stills at a focal distance of 135mm using AF through the viewfinder. 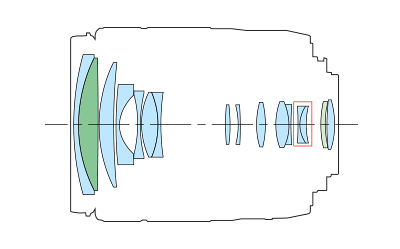