The optical configuration of the RF24-105mm F4 L IS USM comprises 18 lens elements in 14 groups, including three glass-molded aspheric lenses and a UD lens, resulting in high image quality, a more compact optical configuration and reduced aberrations. The lens features Canon’s proprietary ASC (Air Sphere Coating), which exhibits exceptional anti-reflective properties for incident light that enters the lens at an almost vertical angle. These properties greatly reduce the occurrence of flaring and ghosting to help realize high image quality. However, despite its high image quality, the RF24-105mm F4 L IS USM achieves a compact size of approximately 107.3 mm in length—a reduction of approximately 10.7 mm compared to the EF24-105mm f/4L IS II USM (released in November 2016). Combining the lens with an EOS R camera makes possible an incredibly portable camera system.

The RF24-105mm F4 L IS USM is also the first L Series lens to feature a Nano USM, which first appeared in the EF-S18-135mm f/3.5-5.6 IS USM (released in March 2016). When used in conjunction with the EOS R mirrorless camera’s Dual Pixel CMOS AF technology, the lens delivers smooth, high-speed AF during video recording.

Equipped with Canon’s latest microprocessor, the RF24-105mm F4 L IS USM achieves 5 stops* of image stabilization—the most ever achieved by any Canon lens. This improved IS performance is made possible by faster communication between the lens and camera. What’s more, the lens also supports Dual Sensing IS, which applies stabilization to correct large, low-frequency vibration caused by body movement when shooting stills. Video capture utilizes Combination IS, a feature in which the optical IS of the lens works together with the electronic IS of the camera body to produce a superior image stabilization effect.

* When shooting with the EOS R at a focal length of 105 mm. Based on CIPA standards. 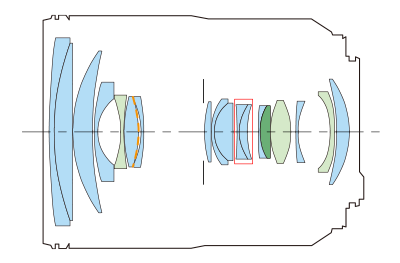