The large-diameter, short-back-focus mount allows large-diameter lenses to be positioned more closely to the imaging sensor, resulting in even higher image quality at the periphery. The lens achieves image quality at fully opened aperture of f/2 comparable to—or even greater than—that of the EF24-70mm f/2.8L II USM (released in September 2012) at its widest aperture of f/2.8.
Despite being a zoom lens, the RF28-70mm F2L USM delivers descriptive performance on par with a fixed-focal-length lens, enabling users to cover the entire 28-70 mm shooting range with a single lens in scenarios that would otherwise require several.

The surface of Canon’s SWC suppresses light reflection with countless wedge-shaped structures more minute than the wavelength of visible light on the surface of a camera lens. With ASC, a film containing a mixture of silicon dioxide and air is created over a vapor deposition lens coating to suppress the reflection of light. Systematic lining of the inside of the coating with spheres of air forms an ultra-low refractive index layer that realizes extreme anti-reflective performance. 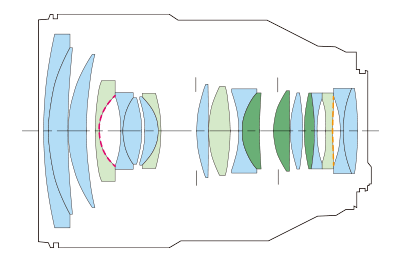