Leap Forward with the EOS

At last, the focal-plane shutter type 35mm SLR cameras entered the age of the AF cameras. Canon launched “EOS650″ which was developed under the new concept. Adopted in this AF camera was the EF lens that was exclusively designed for totally computerized mounting system. At the same time, the company announced the movie video camera based on the VL mounting system.

Canon developed EOS system in 1987. This system incorporates fully electronic mount system that controls AF (auto focus) drive electronically by a driving motor in the lens, and aperture diameter control by the electronic signal from the camera body. This mount system realizes fully electronic control of all data transmission and control, eliminating any mechanical drive or data transmission. This system assures faster and more accurate interactive communication without any loss. The EOS system provides many benefits including;

(1)high operational reliability because of no mechanical power and data transfer mechanism at the mount section.

(3)high-precision control of aperture diameter by the EMD.

(4)realization of TS-E and IS lenses because of electronic contact.

(5)high versatility of accessories, including Extenders. 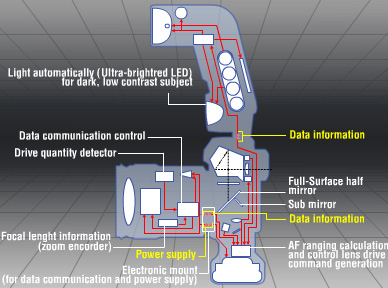 In February 1985, two months prior to the release of the “T80″ camera, an event that rocked the camera industry occurred. Minolta introduced a true AF 35mm SLR camera, “Minolta a-7000,” followed by the “Minolta a-9000″ in September, while Nikon released “Nikon F-501″ camera in April 1986. These SLR cameras were an immediate hit upon release and in addition to the already high domestic demand, high demand was generated in the North American market as well. The 35mm SLR camera leapt to stardom overnight. At the end of April 1986 when the “F-501″ was released, the autofocus SLR camera commanded over 50% share of the domestic SLR camera market.

Canon also marketed an autofocus SLR, the “T80,” however, the focusing performance of the “T80″ fell far behind that of the “Minolta a-7000″ and “Nikon F-501.” Then, in March of 1985, Canon decided that “a highly-refined AF SLR model deserving Canon’s name should be developed with the target market release date of March 1, 1987, the year of Canon’s 50th anniversary.”

The development project was called “EOS (Electro Optical System).” The “EOS” is also the name of the goddess of dawn in Greek mythology, even more apropos for the new-generation SLR camera.

The “EOS” was developed under three major guidelines: no price increase due to the introduction of the AF mechanism, a lightweight design which enables shooting indoor sports hand-holding the camera with a “300mm f/2.8″ lens, and a autofocus sensitivity equivalent to exposure sensitivity. In order to achieve the high-quality camera, Canon embarked upon a two-year period of research and development. These guidelines were based on Canon’s concept to put an emphasis on a flexible system with potential of future enhancement. The concept continues even now as the principle of development for Canon’s cameras. 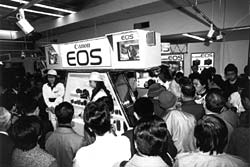 Canon booth at the Japan Camera Show, when “EOS 650″ was unveiled

EOS development project efforts to develop a promising new system for the future bore fruit with the introduction of the “EOS 650″ in March 1987 as scheduled. In developing the “EOS 650,” several innovative and unique Canon’s technologies were employed, which included the highly sensitive focusing sensor, BASIS (Base-Stored Image Sensor), the high-precision motor, USM (Ultrasonic Motor) which was commercialized first in the world, and introduction of a super microcomputer supporting super-high-speed computation and control. One month prior to its release, the “EOS 650″ was shown to the public at the Japan Camera Show in Tokyo and drew rave reviews. In May, two months after entering the market, the “EOS 650″ successfully seized the top market share not only within Japan, but also in Europe. Moreover, the “EOS 650″ garnered the Japan Camera Grand Prix for the same year as well as the European Camera ’87/’88 Award.

The Ultrasonic Motor (USM) is an AF (auto focus) driving motor which Canon commercialized for the first time in the world. Conventional motors convert electromagnetic force into rotational force. Ultrasonic motors, on the other hand, are based on a completely new principle in which rotational force is generated from ultrasonic vibrational energy. The basic motor construction is very simple, consisting of an elastic stator and a rotating rotor. The stator has piezoelectric ceramic elements that, when energized by an AC voltage, make it vibrate to generate ultrasonic vibration energy. That vibrational energy is used to continuously rotate the rotor through the pressure contact between the rotor and stator. USMs make focusing faster, more accurate and quieter (almost silent) than conventional focusing drive by a motor and speed-reducing gear train. Most USM-equipped EF lenses allow full-time manual focus in the AF mode. The ring USMs are suitable for large aperture lenses and super telephoto lenses, and the Micro USMs for smaller lenses.

* The amplitude width of the elastic stator is only around 0.001mm. 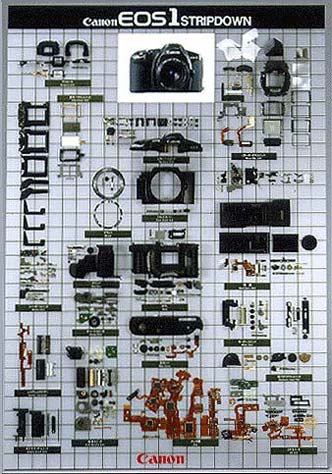 In May 1987, the “EOS 620,” upgraded model of the “EOS 650,” was introduced. In 1989 the “EOS 630″ was released, followed by the flagship of the EOS line the “EOS-1.” Although Canon trailed behind other companies when the autofocus camera was first introduced, the “EOS-1″ with its high-quality AF functions was highly appreciated by professional photographers who needed to capture sports and other movement intensive scenes.

Canon marketed the “EOS 10″ in 1990. The camera featured the bar code system, which enables the user to take pictures as they intend to, simply inputting the bar code data corresponding from sample photos they wished to emulate. The bar code input system caused a stir in the industry. Furthermore, in October of the same year, boasting a full array of features, the lightweight and compact model, “EOS 1000QD” was introduced. It weighed only 500g including batteries. In August 1991, another model was added to the EOS lineup, the “EOS 100QD” was the first really quiet SLR in the world. With the newly developed silent mechanism, this camera reduced the film advance/rewind operation noise by 1/2 to 1/8 in comparison with that of the previous models. This “EOS” lineup really invigorated the SLR market.

The EF-Series Lens Designed for the “EOS”

The development of the EF-series lens, starting in conjunction with the EOS project, produced a completely new and different lens from the FD lenses, including the mount. In designing a new mount system, Canon assigned top priority to user satisfaction. Canon also considered the ideal way to share the 35mm AF SLR with the user in the future, and integrated their ideas into the new mount system. What emerged from their efforts was the completely electronically controlled automatic EF mount that permits highly accurate real-time data transfer between the camera body and the lens. 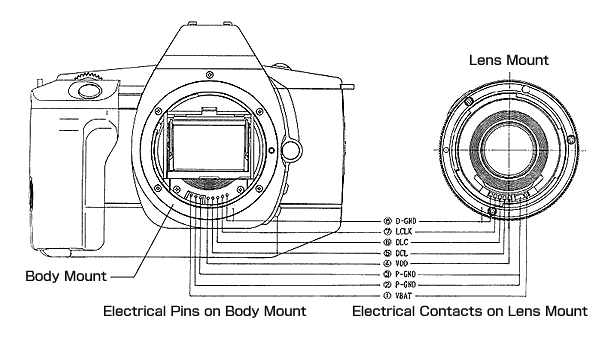 In the development stage, Canon discussed how to get the FD lens users’ understanding and approval for the shift to the new series lens. As the solution, the company decided the basic guidelines to commercialize the new EF lens, which included:

– Employing Ultrasonic Motor (USM) for the focusing system of SLR interchangeable lenses; and

Thus the features of super high-speed AF and silent operation was realized.

2017 marked the 30th anniversary of the birth of the EOS system. Here is a special interview with the 6 developers who helped make it possible.
Find out more here

In 1989, Canon released the “Canovision 8 A1″ a new 8mm video standard, “Hi-8 format” camcorder that incorporated stereo sound. In 1990, the “UC-10,” the smallest and lightest video camcorder in the world at the time was marketed. Finally in 1991, Canon released the “LX-1,” an 8mm video camcorder with interchangeable lenses, which was hailed as the product most deserving of the Canon’s name. With the VL lens-mount standard, the “LX-1″ made it possible to use interchangeable lens. Under the VL mount system, the lens data is transmitted to camera through the interchangeable lens with a built-in microcomputer and based on that information; the camera in turn sends a control command to the lens. The VL lens-mount system was standardized by Canon in cooperation with four other companies, however, Canon was the only company that actually marketed a camcorder using the system. The “LX-1″ could use both the exclusive interchangeable lens and EF lenses designed for the EOS cameras. It was quite popular, especially in the United States.

Since the process of developing film was not required, the still video (SV) camera advantage over the conventional cameras was that its shots were available instantaneously. Yet, the disadvantage of the SV camera was its price. For example, the “RC-701″ camera body alone ran around 380,000 yen. The price of the “RC-760″ introduced in 1987 was around 600,000 yen. These expensive models were mainly used by media professionals. In order to provide an affordable SV camera for general users, Canon set the price target that would not exceed 100,000 yen. The target was met by the release of the “RC-250 (Q-PIC)” in December 1988, whose price was 99,800 yen. The two previous models, “RC-701″ and “RC-760,” were released together with printers, transmitters, and many other systems, but the “RC-250 (Q-PIC)” had a built-in playback function. Connecting the camera to a television set with a video terminal, the user could easily view the pictures that had been taken. The camera with both “shooting” and “viewing” functions received much attention widely. The “RC-250″ was a particular hit on the European market under the name of “ION.”