Diversification in Development and Production

The top-class 35mm camera market gradually shifted from rangefinder cameras to single lens reflex (SLR) cameras. Canon launched its first SLR camera, “Canon Flex.” The lenses for SLR cameras advanced from the “R” series to the “FL” series. At the same time, the company also developed lens-shutter cameras and 8mm cinecameras in line with the policy to be a comprehensive camera manufacturer offering various types of products.

The “VT” camera, introduced in August 1956, discarded the conventional film loading method, in which the film cassette was dropped into the bottom after removing the baseplate (Barnack type), and instead adopted the simpler method using a hinged back cover and threading the film onto the take-up spool. The “T” in the “VT” refers to the “trigger” because the camera incorporated the film advance mechanism with a fast-winding trigger on the camera bottom to improve the shooting speed.

The development of the high-grade 35mm camera had been the great milestone constituting Canon’s mission. Yet during the same period, there was an effort to produce a simpler camera that could be used by anybody. That would be the development of the 35mm lens-shutter camera.

It all begun in 1958 when there were heated discussions within Canon as to whether the company should take the route confined to the manufacturing of high-end cameras or whether it should also enter the market for the intermediate-class cameras. Gradually, the voices of young engineers expressing the opinion “we want to make cameras we can afford” gained strength. This resulted in a tentative decision to produce a prototype of an intermediate-class camera before the company’s overall policy guidelines could be developed. With this background, the development of the 35mm lens-shutter camera started. This camera was the “Canonet,” which swept the entire camera market with the slogan “anyone can buy it and anyone can take pictures with it.” 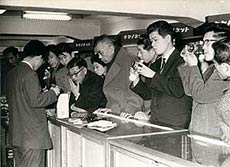 Although the plan was to market the “Canonet” camera in August l960, its debut was delayed until January l961 because of strong criticism from the competitors complaining that the price of under 20,000 yen was too low to compete with. When the camera was introduced for the first time at the display and sales counter on the 7th floor of Mitsukoshi department store in Nihonbashi, Tokyo, the number of people interested in seeing the camera was so great that they overflowed onto the staircases. The total inventory for one week was gone within 2 hours after the sales counter opened. Its sales were so astronomical and its customer acceptance so overwhelming that the February 6, 1961 issue of Shukan Bunshun (a popular weekly magazine) covered the sensation in the article entitled “Go To Hell!! Canonet.” 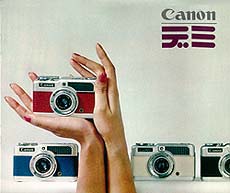 While the boom sparked by the “Canonet” had not quite cooled off yet, the “Canon Demi” camera was introduced in February 1963. It was a compact and lightweight half-frame, or single-frame, camera that permitted twice as many pictures per film. This camera was also a hit with its catch phrase “let’s draw our ‘Demi’ from our pocket.” Also released in October of the same year was the “Color Demi,” which was popular among users because it was available in three different colors: red, blue and white. With the debut of the “Demi” series, the variety of the lens-shutter cameras increased. The important thing was that the technologies acquired during the development of these 35mm lens-shutter cameras were fully fed back into the products that followed. 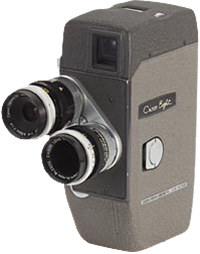 Canon’s first 8mm film cinecamera the “Canon Cine 8T,” was introduced in November l956. The development of the cinecamera began in 1955 based on the knowledge acquired during the 1953 observation tour by President Mitarai to the United States and Europe to survey the camera markets in these countries. During this tour, Mitarai discovered that the “Kodak Brownie,” an 8mm film cinecamera of the Eastman Kodak was enjoying great popularity.

Canon obtained some used cinecameras left behind by the Allied Occupation Forces as well as the products of leading cinecamera manufacturers abroad and studied the film drive and exposure mechanisms through repeated disassembly and testing. Special emphasis was placed on the viewfinder technology. Since the 8mm film cinecamera was required to reproduce the image of subject in the exactly same format as shown in the viewfinder, it was necessary to use the “Porro prism” system, in which two or three right angle prisms were combined with the variable magnification viewfinder mechanism of the “IV Sb.” With this innovation, Canon succeeded in developing a revolutionary viewfinder that was bright and clear, and produced a real image. 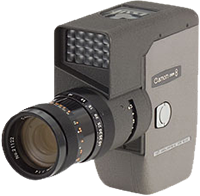 On the other hand, concurrently with the development of the viewfinder, Canon’s lens department was working on improving the zoom lens. The history of Canon’s zoom lens goes back to 1954. 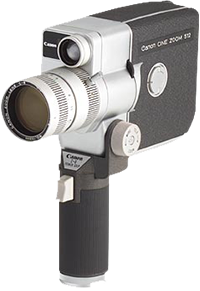 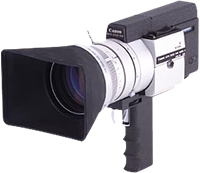 Canon continued to improve the 8mm film cinecamera, aiming to adopt the advanced specifications and functions available in the 16mm film cinecameras. In June l964, the company released the “Canon Cine Zoom 512,” which was equipped with a bright f/1.2 zoom lens of with the magnification of 5X, as well as a spring drive mechanism, which had been the popular in 16mm film cinecameras. The “Canon Cine Zoom 512″ was cherished for a long time by users who enjoyed making home movies, and fully deserved being called a masterpiece.

Eastman Kodak introduced the “Super 8″ system in April l964, while Fuji Photo Film concurrently introduced the “Single 8″ system. In order to meet the users’ needs, Canon developed two types of cinecameras compatible with each film standard. One, the “Auto Zoom 1218 Super 8,” which was marketed in April 1968 for the “Super 8″ system, was widely accepted and had a good reputation because of its high 12X zoom magnification.

The Next High-End 35mm Cameras are SLRs 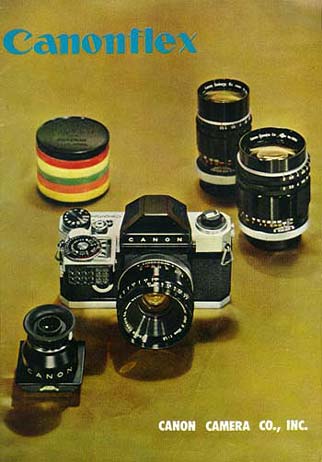 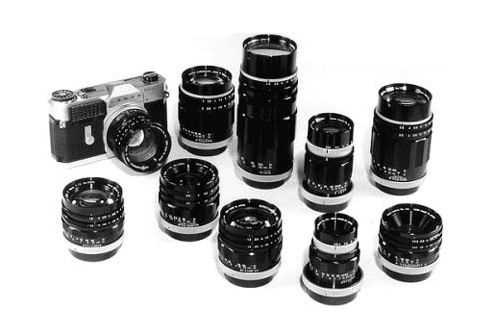 The “Canonflex,” the first 35mm SLR camera from Canon was introduced in May l959. In June of the same year, Nikon released the “Nikon F.” Although the principle of the SLR camera had been known as long ago as the camera, technological problems had been left unsolved for many years in the area of making the camera as light and easy-to-use as the rangefinder camera. With several technical innovations including the pentaprism, the quick return mirror, and the automatic aperture control mechanism, the time had finally arrived for a practical 35mm SLR camera for all types of interchangeable lenses.

Canon developed the R-series lens for the SLR cameras. The cameras using the R series lens were called the R-series cameras. Following the “Canonflex,” the “R2000″ with a top shutter speed of 1/2000 second, the fastest ever for any camera, was introduced in 1960. The “R2000″ evolved into the “Canonflex RM,” which was released in 1962. The “Canonflex RM” had a built-in exposure meter for the first time, and adopted the film advance system with a recessed lever instead of a trigger. The lever improved the operability.

Several new technical innovations were employed in the “Canonflex,” including an interchangeable pentaprism viewfinder, a completely automated aperture control system, and an externally coupled selenium exposure meter. The bright R-series lens included lens having the focal lengths from 35 to 135mm. They were equipped with a fully automated aperture control system called “Super Canomatic.” This aperture control mechanism coupled to the main camera body played an important role to connect the camera main body with the lens, and accelerated the development of the FL-series lens and FD-series lens. The “Canonflex” lens mount used a system called the “breach lock mount,” replacing the conventional screw system. Since the “breach lock mount” method prevented mount wear caused by the direct rubbing between the camera body and the lens, the optical accuracy of the camera increased. The R-series lineup had about 16 different lenses such as the retrofocus wide angle lens, “R35mm f/2.5,” the bright standard lens, “R58mm f/1.2,” and the supertelephoto lens, “R1000mm f/11.” Included among these lenses was the “R55-135mm f/3.5″ zoom lens, which was Canon’s first zoom lens for still cameras.

Canon during the Dawn of the SLR Camera Era 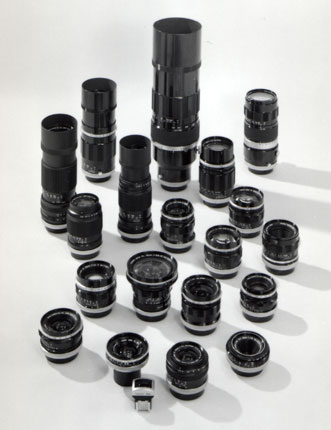 FL-series lenses, the pioneer of the TTL metering

Concurrently with the debut of the FL-series lens that replaced the R-series lens in April l964, the “FX” camera was released. The FL lenses and the “FX” camera comprised a new system configuration designed to achieve smooth coupling between the camera body and the lens.

In the 1960s, the Through the Lens (TTL) metering system was identified as the challenge for the SLR cameras. TTL metering determines the optimal exposure for the amount of light transmitted through the shooting lens, which is possible because of the unique characteristics of the SLR camera. The advantage of this method was that it permitted measuring only the light in the field of the lens. It was natural for the camera user to have great expectations for this convenient TTL metering. In order to respond to the customers expectations, Canon introduced the “Pellix” in 1965 and the “FT QL” in 1966. Both cameras featured partial-area TTL metering SLR.

Although the R-series lenses had excellent characteristics, they had several problems in terms of manufacturing costs and future technical developments, all of which required drastic change. The FL-series was developed to overcome this situation. It was known that fluorite used in the supertelephoto lens would be effective in reducing secondary chromatic aberrations. Yet, the fluorite crystals were too small for practical applications. Canon found the solution by growing artificial fluorite crystals and introduced the “FL300mm f/5.6″ and “FL500mm f/5.6″ lenses in 1969, both of which used the artificial fluorite crystals.

Time of Changes in Film Standards

The domestic film industries that had been undergoing steady growth during the 1960s were suddenly confronted with abrupt changes in film standards. The new film standards were the Instamatic System 126 of Eastman Kodak of the U.S.A. and the Rapid System of the Agfa of West Germany. Canon developed the “Canomatic C30″ and the “Demi Rapid” to these film standards. Since the loading methods for these films were not compatible with that for SLR cameras, the development of specialty cameras for these film standards was limited to lens-shutter cameras only. Canon developed its own QL (quick loading) system for loading normal 35mm films and introduced it in the “FT QL” SLR camera.

“To create the foundations for our company’s prosperity this year, we must hold cameras in our right hand and business machines and special optical equipment in our left. At the same time, we must substantially boost our exports.”

These words became the slogan of the company from that time on. In fact, in 1960 Canon started entering the fields of electronic calculators and copying machines under a long-term business plan. The sales of business machines and special optical equipment were rapidly increasing. The time had arrived when the company had to shed the image that it was just a producer of cameras.

In order to achieve a great leap forward as a comprehensive manufacturer of imaging and information processing equipment including cameras and business machines, the name of the company was changed to Canon Inc. on March 1, 1969. The catch phrase used in advertising at that time was “Light and Electrons, Connection to the Future.” The ad copy indicated the roads taken by Canon in the past, hinting at the roads to be taken in the future, and said Canon was ready to enter a new world.