The company unveiled the long awaited professional camera, Canon F-1. Many types of accessories which enabled seamless and instant compatibility with the top-of-the-line 35mm camera were also prepared to realize systematic photography. The camera system was widely accepted and dominated the market. New FD series lenses were also introduced one after another during this period, ushering in a new era for SLR cameras. A great progress was also made in the 8mm cinecameras. 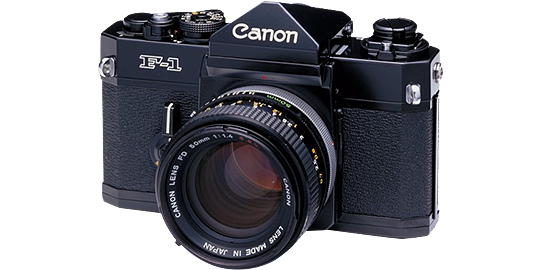 “F-1″ Responding to the Needs of Professional Photographers

The history of Canon’s 35mm SLR cameras began with the “Canonflex.” Although a lot of technology had been incorporated into the SLR camera, around the fall of 1964, there had been growing calls both inside and outside of the company for Canon to embark on production of a very advanced SLR camera to meet the requirements of professional photographers.

After five years of development efforts, the “F-1,” which has left the most glorious footprints in the history of the camera, was unveiled in March 1971. In an effort to develop the “F-1,” Canon was said to have invested significant human, financial and technological resources. The time and energy put into developing the “F-1″ was equivalent to that required for developing 10 or more conventional cameras.

The concept behind the development of the “F-1″ was a camera exclusively designed for professional photographers. In addition to the multitude of accessories and functions, it proved to be durable, highly reliable and performed well even under the harsh conditions professional photographers are often forced to confront. It was durable enough to take 100,000 exposures, allow instant application of all system accessories without adjustment, and perform in temperatures from -30 degrees to +60 degrees Celsius. There is an anecdote that a salesperson stood on top of the camera to prove its durability. Thanks to its reliability, the “F-1″ was designated as an official 35mm camera for the 1976 Summer Olympics in Montreal, Canada, and the 1980 Winter Olympics in Lake Placid, U.S.A.

Based on technology developed for the “F-1″ camera, in 1972 the company succeeded in producing the “High Speed Motor Drive Camera” having the shooting speed of nine frames per second. Because of its outstanding performance at the 1972 Munich Olympic Games in West Germany that year, the camera gained a high reputation among the domestic and overseas press. 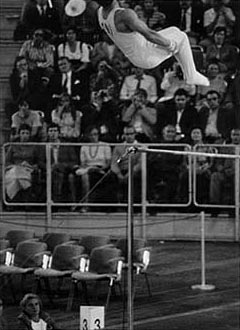 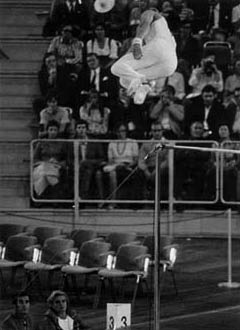 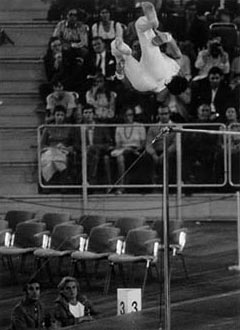 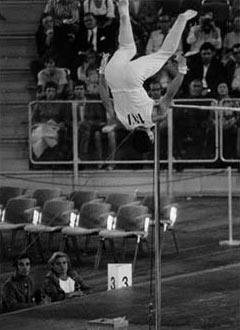 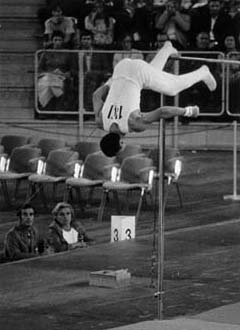 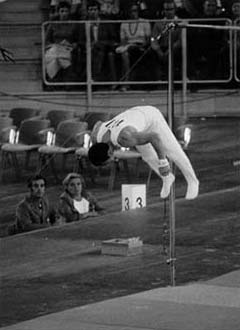 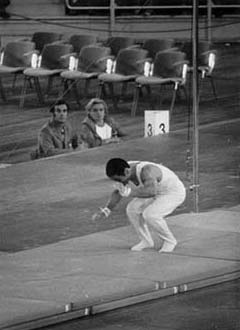 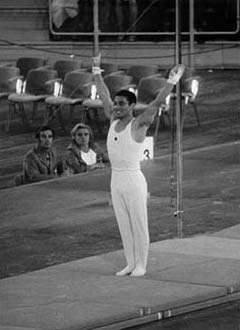 “F-1″ captures the “Somersault on the Moon,” a horizontal bar performance at the Munich Olympics 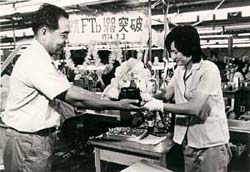 Commemoration of the millionth “FTb” at the Fukushima Plant

The “FTb” camera, a high-quality mass-market model was launched simultaneously with the “F-1.” It had the same basic functions as the “F-1,” and used the same new FD-series lenses, which allowed maximum-aperture TTL metering, and cordless flash sync with a hot shoe. Thanks to the outstanding technical approach and performance, production of the “FTb” reached one million within three years of its launch, making it a mainstay product for Canon.

Full Lineup of Accessories Prepared for the “F-1″

In order to meet the needs of professional photographers for a highly reliable camera, the “F-1″ was designed under the concept of utilizing the body itself as a dark box containing the shutter and exposure control systems and providing additional functions through flexible combination of accessories. Therefore, a wide variety of accessories such as interchangeable viewfinders, a film chamber for extended shooting capacity and a motor drive unit with interval timer were available for the “F-1.” For harmony with the “F-1″ body, these accessories were basically black in color and linear in shape, and designed to emphasize the rugged image of a camera suitable for professional use. The “F-1″ system with its multitude of attachments presented a grand spectacle. Nicknamed the “heavy tank” by its users, the “F-1″ was unrivaled in its durability and reliability.

Introduction of the Third-Generation FD-Series Lens 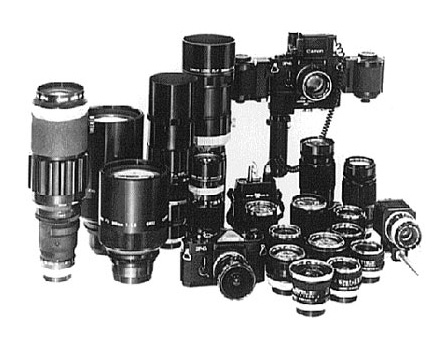 Development of the FD-series lens represented not just a renewal of the FL-series lens, but was based on consideration of a future Auto-Exposure (AE) control system, and preparation for the coming optical/electronics age. Unlike the FL-series lens equipped with a single automatic diaphragm pin, the FD-series lens was notable for its signal pin for transmission of the lens’ maximum aperture, allowing full-aperture metering. Such specification became a mainstream in the era of the electronic camera.

This was the target for development of the FD-series lenses. Regarding the development of the optical system, Hitoshi Ito, who had been involved in development of Serenar lens, and his subordinates established basic policies and detailed plans from design stage to the market release.
1)The number of lens elements should be minimized, and aberrations should be corrected perfectly.
2)Flare should be reduced even at maximum aperture, and blur should be uniform. The smaller the aperture, the sharper the image should become.
3)The overall image should uniformly have high resolution and contrast.
4)Natural color should be reproduced and well balanced throughout the entire lens series.
5)All mechanisms should be easy-to-operate and durable.
These five guidelines have been the underlying concept for the development of all Canon lenses to date.

The following technical criteria were specifically addressed:
1)Central resolution exceeding 100 lines per millimeter should be ensured.
2)Functions for producing high contrasts should be added.
3)To minimize the color balance difference among lenses and to achieve the predetermined color balance, the appropriate glass material and multi-layer coating technology should be used
4)Flare should be reduced by optimizing the lens configuration and preventing interface reflections. Technology for preventing reflection from the inner barrel and components should be developed. The barrel should prevent non-image forming light from entering the lens.
In March 1971, 14 new FD lenses were launched concurrently.

The “FD50mm f/1.4 S.S.C.” lens, which used the optical system of the “FL50mm f/1.4 II,” became known for its high-resolution and high-contrast performance with outstanding color reproduction. As the standard model of FD-series lens, the “FD50mm f/1.4 S.S.C.” was employed in various optical measurement equipment despite being designed for photographic use. The “FD300mm f/2.8 S.S.C.” lens made an impressive debut as a forerunner of a full range of very bright telephoto lenses.

Recognizing that a new phase of camera technology was approaching, Canon had started research and development of the Auto-Exposure (AE) SLR camera. Concurrently with the development of “F-1,” Canon took a repeated trial-and-effort approach to produce the best version of Shutter speed-priority AE, Aperture-priority AE, and Program AE. The results were as many as four series of prototypes.

This extensive research reached fulfillment when Canon launched its first AE SLR camera, the “EF” in November 1973. Most AE cameras launched around the same time by competitors incorporated aperture-priority AE. The “EF” employed shutter speed-priority AE that allows the photographer to pick a shutter speed high enough to minimize camera shake at the time of shutter release.

Like the 35mm focal-plane-shutter camera, the 35mm lens-shutter camera also demonstrated tremendous progress. A series of offspring of the “New Canonet” marketed in 1969 were introduced in 1970s. The “Canonet G-III 17″ in particular, gained popularity and established a sales record of 10 years because of its compactness and easy-to-use features. Its aggregate sales reached about 1.2 million units.

In those days Canon pioneered a camera with a feature to imprint the date on the picture. The first camera, named “Canodate E,” was launched in December 1970. This model was followed by the “Canodate E-N,” and it was replaced by the lightweight, compact “Datematic” camera in November 1974. Its body was made of reinforced plastic to reduce the weight of the camera. The processing technology gained through its development was later applied to SLR camera bodies and lens. 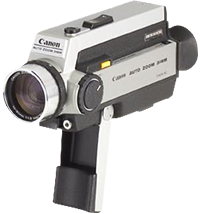 A long-term hit model, “Autozoom 318M,” which had been produced over 12 years

In the field of 8mm film cinecamera, the trend began to gravitate toward longer zooms. In 1970, the “Auto Zoom (AZ) 2018 Super 8″ exhibited at the “Photokina” trade-fair held in Cologne, West Germany, caused a sensation with its 20X zoom lens, amazingly high magnification at that time. But the production costs proved exorbitant and it was not commercially viable. The “AZ814E (Electronic)” launched in March 1972, and the “AZ1014E” in March 1973, adopted numerous ideas brought by the development of the “AZ2018 Super 8.”

Among mass-market models, the “AZ318M” should never be forgotten. This model was launched in 1972 with the newly designed 3X zoom wide-macro lens for close-up photography, and was electronically controlled before 35mm SLR cameras were. According to the record, sales were favorable; during its production period of 12 years and 7 months, 450,000 units were produced.

In 1971, Eastman Kodak announced a new film standard called the Existing Light (XL) system, which was an upgrade of Super 8. The XL system increased the amount of light that reached the film, by increasing the shutter angle. It became a mainstay for 8mm film cinecameras along with the advent of high-sensitivity film. All of Canon’s 8mm film cinecameras have employed the XL system since the release of the “AZ512XL E” in 1975, and gained the reputation of a “powerful system in low light conditions.” 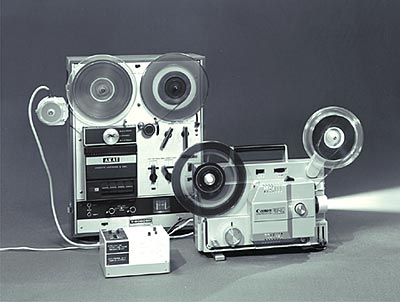 One of the major targets for the development of 8mm film cinecameras was how to incorporate sound. The “Cine Projector T-1″ launched in April 1972, achieved the complete synchronization of image and sound, the so-called “lip-sync” function. The projector recorded the signals from the shutter of the camera synchronized with the sound on the audio tape during filming and used the signals from the tape-recorder during playback to electronically control the projector’s film advance motor, allowing accurate lip-synchronization with accuracy to one frame without any tracking error.

Canon, upon getting into the sound cinecamera market, established a policy of improving the sound quality without sacrificing conventional functionality, avoiding large-size cameras for the sake of sound recording capability.