The Precision Optical Instruments Laboratory that established its reputation for developing the “Hansa Canon” was transformed into the Precision Optical Industry, Co., Ltd. to start the full-scale production and sales of cameras. The company specialized in manufacturing high-quality 35mm cameras, and developed the unique “Serenar” lens with the motto that it would produce world class cameras. From the rubble in the war-torn plants, the company resumed the production of cameras by overcoming the difficulties in procuring basic materials.

Along with the move to Meguro Ward, manufacturing the “Hansa Canon” and hiring more employees, Japan Precision Optical Instruments Laboratory appeared to have made steady growth during those days, but the actual situation was different. It was reported that the production volume ranged from a maximum of 10 cameras per month to barely one camera per week. Despite the fact that the company had introduced Japan’s first 35mm rangefinder camera, its production capability did not increase, resulting in tough business conditions. In order to overcome the financial difficulties, it decided to incorporate the company.

To start anew, on August 10, l937, the laboratory was reorganized as a joint-stock company and the name was changed to Precision Optical Industry Co., Ltd. Canon now designates this date as the official founding date.

Cameras that Bears the Name of Canon

With the incorporation, the company’s business began to take off. Following the “Hansa Canon (Standard Model),” the company successively introduced the “S or Newest Model” and the “J or Popular Model” in February l939 and the “NS or New Standard Model” by the end of the same year. Yet, the company’s production system was literally manual, especially in the finishing processes: using files to smooth the rough surfaces of the individual parts, or filling in the unwanted cracks in the camera bodies, etc. 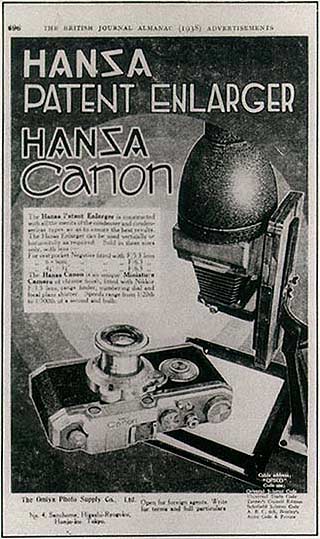 After the introduction of the “Newest Model,” the word “Hansa” disappeared from the brand name, and was replaced with just “Canon.” This, however, did not mean a break in the relationship with Omiya Shashin Yohin Co., Ltd. In fact, Omiya continued to provide strong assistance, especially in the sales promotion. At the time when the general monthly income of salaried workers was 40 ~ 50 yen, the base monthly wage of Omiya’s sales personnel was approximately 20 yen, not high indeed. It was reported that these sales personnel received commissions of 5 yen per sale of a “Standard Model.” At the time, even the “Popular Model” was too expensive for an average salaried worker to purchase. With the limited consumer market size for cameras, the sales personnel of Omiya developed a strategy to target specific individuals with purchasing power, rather than focusing on retail camera stores. Their strategy was so effective that the income and morale of the camera sales personnel increased dramatically.

Since the sales of the high-grade 35mm cameras had been increasing rapidly, Omiya Shashin Yohin, as a sole sales agent of the camera, seemed even to have a fantastic plan to introduce the camera to the European markets, the stronghold of the Leica and Contax. Their intent was shown in an advertisement for the “Hansa Canon” that Omiya placed in the March l938 issue of the UK photography magazine, the British Journal of Photography.

The high-grade 35mm cameras of Precision Optical Industry were represented by a series of new models including the “Standard Model,” “S or Newest Model,” “J or Popular Model” and “NS or New Standard Model.” The lineup established the reputation that Seiki Canon (Canon of the Precision Optical Industry Co.) was synonymous with Japanese high-grade 35mm camera. In the middle of 1937, strong voices were raised calling for production of the company’s own lenses. Yoshizo Furukawa, the company’s first optical engineer, developed some lenses on a trial basis such as the “50mm f/4.5″ lens, the “45mm f/0.85″ lens for 16mm cinecameras. He was also involved in developing lenses such as the “50mm f/3.5″, a non-rangefinder coupled “135mm f/4,” and lenses for the indirect X-ray camera. 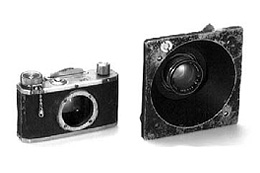 Through the contest held within the company to name the original “50mm f/3.5″ and “135mm f/4″ lenses, “Serenar” was chosen as the brand name given to these lenses. The “Serenar” connotes the word “serene” indicating “clear, calm and tranquil,” and originates in the Sea of Serenity on the moon.

Appointment of Takeshi Mitarai as President, and Post-War Recovery

In 1942, Takeshi Mitarai (1901 – 1984), a friend of Saburo Uchida, became president of the company. Although he was an obstetrician by profession, Mitarai had long been an enthusiastic supporter of Uchida since the early days of Precision Optical Industry Co., Ltd. He was rather a unique individual, and had been the auditor of Precision Optical Industry before assuming the presidency. Even earlier, Mitarai had established Mitarai Obstetrics and Gynaecology Hospital in Mejiro Ward of Tokyo after working in the obstetrics department of a large hospital.

The post-war goal of the company advocated by President Mitarai was “Catch-up with, and surpass the Leica.” The spirit of this goal, shared enthusiastically by all the company employees, became the engine for the post-war recovery of the company. He stressed the so-called “Sanbun-setsu System (the three-division system)” to share the company’s profits by labor (employees), capital (shareholders), and management (the company). He advocated the three-pillar guidelines: “Competence-Based Promotion,” “Top Priority to Health,” and the “Family Comes First,” all of which are pertinent even today, and these became the foundation of the company’s management philosophy. The “Family Comes First” guideline was translated into the G-H-Q (go-home-quickly) activity, a play on words of the occupation forces’ GHQ, or General Headquarters. Other changes implemented by President Mitarai included a bonus system to boost the morale of the company employees.

Recovery from the Wartime Rubble

On August 15, l945, World War II ended with many large cities throughout Japan in ruins. Fortunately, Precision Optical Industry Co., Ltd. escaped major damage except for the partial loss of the Itabashi factory, which had been established in 1944 by the merger with Yamato Kogaku Seisakusho (Yamato Optical Manufacturing Co., Ltd.) Even this loss was not directly related to the war and was due to an accidental fire during the final days of the war. The headquarters factory in Meguro Ward, as well as the Takara-mura factory and the Yamura-machi factory (both were facilities evacuated from Tokyo) in Yamanashi Prefecture survived the war without major damage, and had continued to produce cameras in small-scale operations. Yet, all of these factories were closed immediately after the war when the entire country was in the state of chaos, resulting from all essential materials being scarce. Precision Optical Industry Co., Ltd. was temporarily disbanded with President Mitarai’s declaration: “Since I am at a loss about what to do, I will shut down the plants and disband the company immediately. But, remember to come back as soon as I call you back for restoration.”

The restoration opportunity for the company had arrived sooner than expected since the Allied Occupation Forces (centered on the U.S. Forces) showed great interest in Japanese cameras. Mitarai felt that it was not impossible to restart camera production, and submitted an application for production of consumer goods to the GHQ (the Allied Army General Headquarters). The application was granted on October 1, l945, two months after the end of the war, for Precision Optical Industry Co., Ltd. to resume the production of cameras.

The first post-war model was called the “J II (Post-War Popular Model),” which was produced by scrounging up the components of previous models such as the “Standard Model.” Being made of scrap, the post-war model had a unique shape to the viewfinder cover, which was different from that used for the “Popular Model.” The record showing that only three cameras were produced in that year indicates the hardships endured by the company during its restoration.

Valuable Suggestions Received from an Individual Outside the Company

There was an unusual American engineer whose name was William R. Gorham. He became a naturalized citizen of Japan in l941, and made strong contributions to the establishment of Nissan Motor Company. He had his Japanese name as Katsundo Gorham, and visited Canon often during the 1940s to provide valuable suggestions and recommendations regarding the procurement of machinery and technological innovation. He proposed and implemented the concept of “Scheduled Daily Production,” in which the daily target of the production was predetermined to achieve the uniform flow of camera production. Gorham also suggested a system in which the product inspection department becomes independent of the plant manager and is placed directly under the president. In this manner, the inspection could be performed without regard to the whims of the plant manager. In addition to the introduction of the rational improvement plan, which was somewhat akin to the American method, Gorham made a tremendous contribution to the modernization of Canon through his warm and energetic personality. When Gorham passed away in October 1949, at his bedside was none other than Takeshi Mitarai.