The Leader in the New Imaging Era

There is no end to the advances in the EOS series, synonymous with the 35mm AF single lens reflex camera. Dramatic improvements are expected in the APS cameras due to the successive release of new zoom lenses. Coincident with the diffusion of computers, new products for digital still camera and digital movie camera have begun to be put on the market at an unprecedented speed. The areas of the image information processing equipment are ready to enter a totally new era. 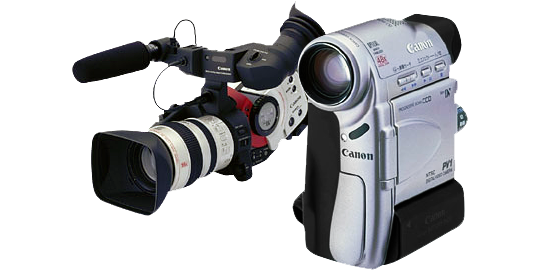 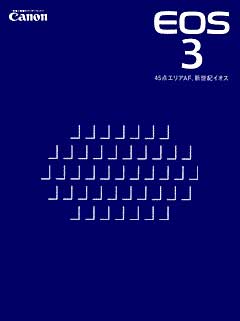 During the latter half of the 1990s, new EOS models were marketed successively. The “EOS-3,” released in November 1998, represented the high-end camera to beat. The development goals suitable for the high-quality camera were determined, including:

– Durability and reliability comparable to the “EOS-1N”

The result was a camera with 21-zone evaluative metering sensor linked to the focusing points, 45-point Area AF, and eye-controlled focusing system with improved focusing speed and precision. Among the innovative features, the great advance in AF mechanism was astonishing. The number of focusing points started with one in the center and increased three and then five points. Finally 45 Area autofocusing points were achieved in the “EOS-3.” All 45 areas had both vertical and horizontal position that coupled with the eye-controlled focusing system. The rigidity and reliability of the “EOS-3″ matched its advanced specifications. The “EOS-3″ with the advanced functions caused quite a stir as it surpassed the reigning flagship “EOS-1N” of the time, and earned the confidence of the advanced amateur and professional photographer. 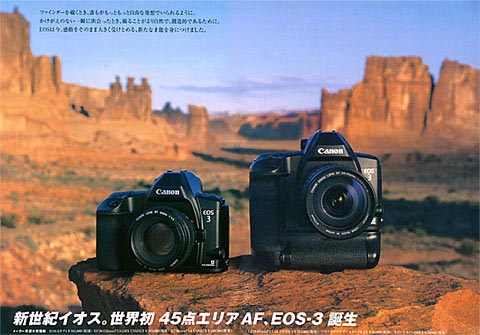 In April 1999, the “EOS Kiss III” made its debut. Though the “Kiss” series were designed as entry level models for beginners, the “EOS Kiss III” far exceeded the expectations for an entry model. It incorporated 7-point Area AF, 35-zone evaluative metering to reduces exposure errors, and other advanced features. Based on the concept of the small-sized and lightweight camera inherent to the “Kiss” series, the “EOS Kiss III” weighed only 355g including batteries. Moreover, like other EOS cameras, it was compatible with all EF lenses and allowed to use the high-end professional lenses (recognizable by the red band on the front). In words, though being an entry model, the “EOS Kiss III” was also a camera fit for professional photography. It was a perfect camera to satisfy a wide range of users from beginners to those aiming for creative photography.

The “EOS-1N,” which was chosen for photo-opportunities all around the world by amateurs and professionals alike, was reborn in April 2000 as the “EOS-1V.” Developed with the goals of an even faster and more precise AF mechanism, high-speed continuous shooting, and high reliability based on proven rigidity, the “EOS-1V” was equipped for high-speed continuous shooting up to 9 frames per second with the power booster. To further improve the performance of the “EOS 3,” the refined high speed/high precision 45-point Area AF and 21-zone evaluative metering, other cutting-edge mechanisms were incorporated. With the application of “thixo-molding,” an advanced molding technology that combines metal die casting with plastic injection molding technology, Canon succeeded in producing curved body covers representing a synthesis of beauty and function, and at the same time making rigid and durable cover of magnesium alloy. The “EOS-1V” had 20 Custom Functions to allow detailed operational settings according to user’s needs. With its numerous state-of-art technologies, the “EOS-1V” won the Grand Prix at the Photo-Journalists Club’s 17th Annual Camera Grad Prix. The “EOS-1V,” as a leading edge AF SLR camera worthy of the new century, attracted great attention within the camera industry and beyond. 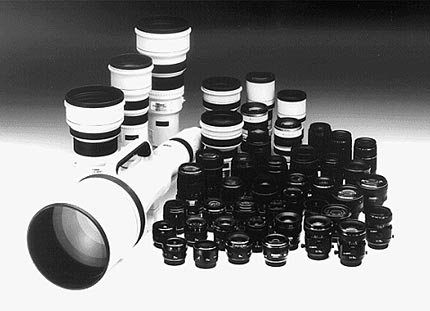 The EF-series lens had over 50 types of lenses ranging from ultra wide angle lenses to super-telephoto lenses. The lineup includes a rich variety of lenses such as a close-up lens, large aperture lens like the “EF50mm f/1.0,” and a high magnification zooms of 35mm-350mm. Moreover, general use, medium grade, and professional specification lenses are all provided in the series. Included in the lineup are the IS lenses with image stabilizer. The lenses are as effective as a shutter speed two stops faster., Another lens series with unique features is the tilt and shift TS-E lenses which have subject distortion correction and perspective control mechanisms.

Camera shake is a major cause of blurred image especially with telephoto lenses. Normally, a shutter speed at least as fast as the reciprocal of the lens focal length, (1/focal length) sec., can prevent a blurred image due to camera shake. However, under low-light conditions or with slow film, a slower shutter speed will be required, resulting in image blur for handheld shots.

Canon started development of IS (Image Stabilizer) technology in 1980s and introduced EF75-300mm f/4-5.6 IS USM in 1995, the world’s first interchangeable lens for 35mm SLR with a built-in image stabilizer. The vibration detecting gyro sensor detects the level of camera shake and the actuator moves a part of the optical system (IS lens group) vertically to the optical axis depending on the degree of camera shake, to stabilize the image on the film plane.

Normal image stabilizing is suitable for shooting of stationary subject. However, EF300mm f/4 L IS USM has “IS Mode 2″ to stabilize finder images at panning shots of moving subjects.

Counteraction by IS lens group

The lens optical axis and film plane center are alignment and the optical axis is vertical to the film plane in case of ordinary lenses. If relation between the lens optical axis and film plane is changed, special effects on images can be obtained. For example, if the optical axis is changed not vertical to the film plane or the plane of focus is swung not parallel with the film plane, the range of focusing can be controlled to deep or shallow focus without changing aperture. This operation is called “tilt”, which is achieved tilting the front part of the TS-E lenses. Shifting of the optical axis from the center of the film plane makes it possible to correct or enhance perspective distortion. This operation is called “shift” . It eliminates the tapering off of the building to make a natural expression of the images in the picture, correcting perspective distortion. “Shift” is achieved by shifting the front part of the TS-E lenses.

Before Canon TS35mm f/2.8 S.S.C. introduced in 1973, “tilt and shift” operation was possible only with large format cameras. Canon also introduced three TS-E lens series with auto iris by EMD. The TS-E series lenses are the only interchangeable lenses at the time for 35mm SLR cameras, which have tilt-shift operation with fully-electronic automatic diaphragm control system.

Along with the emphasis on compactness, somewhat unconventional models also made their debut. Among those, the “IXY D5″ camera introduced in November 1999 was waterproof down to five meters and incorporated an auto date function as well as six different flash modes such as slow-synch and underwater macro modes. Furthermore, with its rounded white-gold and clear-green body, a fresh and refined appearance was achieved. The “IXY D5″ was an all-purpose camera that would appeal to a host of users not only to those who love outdoor activities. 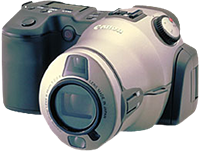 The advances in digital cameras and digital video camcorders have been breathtaking since the mid ‘90s. Along with the advancement of computers and tele-communication networks, these products began playing the role of essential peripheral devices. In the field of digital cameras, Canon on the one hand introduced the super-high-end SLR models such as “EOS D2000″ in March of 1998 and the “EOS D6000″ in December of the same year, while on the other Canon introduced the compact digital cameras for the mass market. Released in April 1998, the “PowerShot A5,” having an 810,000-pixel CCD (Charge-Coupled Device) imaging sensor and using a CF as the recording media, gained popularity as a pocket-sized digital camera. In November of the same year, the “PowerShot Pro70″ made its debut. This model had a 1.68-megapixel CCD and aperture priority AE, targeting at those interested in creative photography. In May 2000, Canon introduced the digital version of the best-selling “IXY” Advanced Photo System camera, the “IXY DIGITAL.” The digitized version of “IXY,” while keeping the “IXY” body size, had a 2.11-megapixel CCD. It was the world’s smallest and lightest digital camera (with optical zoom lens in the 2-megapixel CCD class). It was an immediate hit, taking top market share.

In October 1998, four companies including Canon, Eastman Kodak, Fuji Photo Film, and Matsushita Electric Industrial, jointly announced a new standard digital printing format called DPOF (Digital Print Order Format). For digital printing, each manufacture had so far had different rules to specify images and the number of prints. The DPOF standard is an attempt to standardize the specifications of digital printing, thereby minimizing cumbersome print ordering processes at the digital service photo-labs as well as for personal printing. 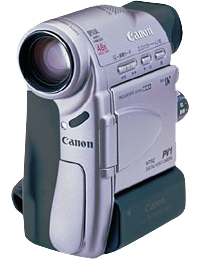 “PV1,” a digital camcorder intended for family use

In 1997 Canon marketed its first digital video camcorder, the “MV-1,” bringing Canon into the digital age based on the DV format. The “MV-1″ employed a progressive-scan CCD that decreases video image shake in comparison with an interlace-scan CCD used by other companies. As the progressive-scan CCD required complicated processing of signals using the advanced technology, Canon’s decision to employ the method showed its policy as a leading camera manufacturer who never compromised on image quality.

Following the “MV-1,” in 1999, the compact, lightweight, high image quality digital video camcorder “PV1″ was released. It incorporated a mechanism to record and playback not only moving images, but also still images. The “PV1″ evolved into the “FV10″ in May 2000. This digital video camcorder series was equipped with an optical image stabilizer, a high-powered zoom lens, and digital audio effects. With the advanced feature, the digital video camcorder gained popularity among family users to enjoy shooting through easy and simple operation. 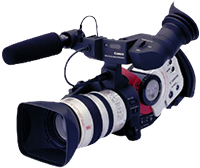 “XL1,” carried on the space shuttle as the NASA official digital camcorder

For the advanced amateurs as well as for the professional videographers, Canon introduced the “XL1″ digital video camcorder in February 1998. It allowed the use of interchangeable lenses. In addition to several dedicated lenses for this model, such as the 3X wide angle zoom lens and the 16X zoom lens with image stabilizer, the “XL1″ was compatible with the EF-series lens like the “LX-1″ Hi-8 version. Because of its functionality, its rigidity, and its proven reliability, the “XL1″ was adopted as the official digital video camcorder of the National Aeronautics and Space Agency (NASA) and traveled to outer space on board the space shuttle.

For nearly 70 years, Canon has produced only the best cameras and lenses, and continued to put that expertise and experience into all the optical, electrical and electronic technology products. Canon is committed to continuing that tradition of quality into the 21st century, in which rapidly changing digital media will play an increasingly major role. 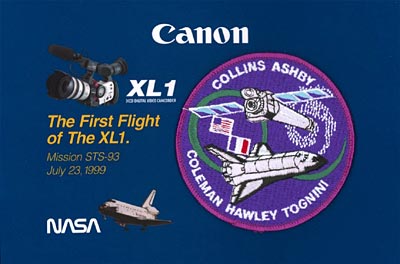 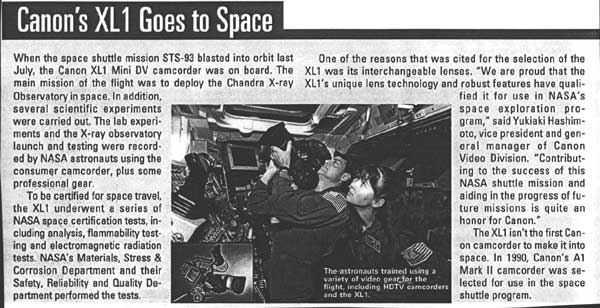