Employed in the AF cameras were the innovative features of eye-controlled autofocus and the miniaturized zoom lens. The technological revolution in camera design proceeded with development of the new photographic system called APS or “Advanced Photo System,” and improvements in move video cameras. Canon continued to develop new technologies that meet the needs of users and provide highly functional and highly reliable cameras.

The Evolution of the “EOS-1″ for Professional Use 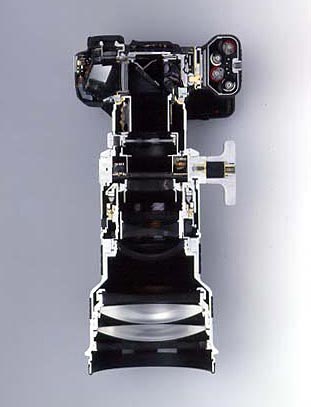 The “EOS-1,” which was unveiled in 1989, gained the approval of professional and advanced amateur users and firmly positioned itself as Canon’s most advanced model. Entering the 1990’s, with the rapid advancement of optical and electronic technologies, more upgrades were expected. Canon had continuously been engaged in the development of lenses on the cutting edge of technical achievement, and strongly recognized the need for models that could satisfactorily work with large aperture lenses and supertelephoto lenses. In response to the users’ enthusiastic demands, the “EOS-1N,” the new flagship of the EOS camera line, was introduced in November 1994. The birth of “EOS-1N” enabled the user to fully exploit the abilities inherent in the high-performance EF lens.

In addition to such functions as the 5-point Area AF, 16-zone evaluative metering sensor linked to focusing point, and reduction of film transport and drive gear noise, the “EOS-1N” incorporated improved features in terms of its operability and rigidity by reflecting the feedback from the professional photographers.

Another model was added to the EOS-1N line, “EOS-1N RS.” The camera has a stationary pellicle mirror that ensures capturing that illusive moment because there is no viewfinder black-out at shutter release. and the fixed mirror also gives high-speed continuous shooting at the speed of 10 frames per second. The perfect AF camera for professional use, the “EOS-1N” continuously filled the role of flagship for six years, being supported by the confidence of its users.

Expanding the Users of SLR Camera with “EOS Kiss” 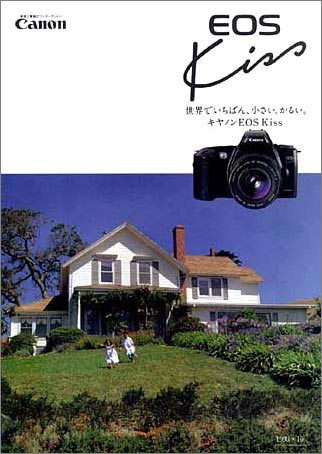 The “EOS Kiss” was introduced in September 1993. “Kiss” stood for “Keep It Smart and Silent.” While the “EOS Kiss” featured a small, compact design and automated operation as an entry model for the beginning SLR camera user, it incorporated AF functions, an exposure mechanism, and various AE modes to rival the performance of an advanced model. Widely supported by both beginners and artists for creative photography, the “EOS Kiss” became a great hit.

The “New EOS Kiss” released in September 1996 was an refined version of “EOS Kiss” in terms of higher performance, easier operability and an even more reasonable price. Succeeding the basic concepts of “EOS Kiss,” which were light weight, compactness and ease of operation, the “New EOS Kiss” was equipped with newly developed mechanism, Multi-BASIS AF sensor with three focusing points. The focusing point can be selected manually by the user or automatically by the camera. Even with moving subjects, the AI Servo AF movement predictor automatically worked to focus the subject instantaneously. Thus, the “New EOS Kiss” was provided with specifications equal to those of advanced models.

Canon continued to introduce innovative technologies into the EOS series, which appealed to a wide range of users. Fruits of these efforts emerged in November 1992. The “EOS 5QD” could be called the representative camera of the 1990’s. The most distinguished feature of the “EOS 5QD” was the eye-controlled focusing system. Canon had developed the epoch-making, dreamlike feature: as soon as the user looks at one of the five focusing points, the camera autofocused at that point. The autofocusing system was improved in the “EOS 55″ released in September 1995. Based on the specifications of the “EOS 5QD” such as the 3-point Area AF and continuous shooting at the speed of 2.5 frames per second, the “EOS 55″ had several improved features, which included the eye-controlled focusing during vertical shooting and the dual-dial, dual-lever system for quick and easy operation.

The popular, compact lens-shutter models with fully automated AF system began taking divergent paths: one path leading to full specification models for the pursuit of highly refined image quality and the other leading to general use models having simple features allowing care-free photography.

The “Autoboy A (Ace),” released in September 1992 includes advanced specifications such as a 38-76mm zoom lens and midroll-switchable panorama format. Other features included wireless remote control as standard equipment, 5-selectable captions for imprinting, and a quiet film transport mechanism. In September of the following year, the ” Autoboy S (Super)” was released. It had a Best Shot Dial with seven AE mode settings. Then in October 1995, the “Autoboy SE” was released. It was the world’s first energy conserving and environmentally friendly camera using a solar battery in tandem with a lithium battery.

On the mass-market side, the easy-to-operate “BF35 (Big Finder),” with its large viewfinder, was introduced in March 1992and became a record hit. Several easy-to-operate cameras were put on the market, such as the “CB35M” in September 1992, which had a single shutter speed of 1/125 second and a fixed focal length.

The Advanced Photo System was jointly developed by five companies, Canon, Eastman Kodak, Fuji Photo Film, Minolta, and Nikon, and was announced February 1, 1996. The system uses a new film format called IX240. The film is 24mm wide. The film cartridge enables drop-in film loading. The new system not only realized easy film loading without failure, but also accelerated the development more compact cameras. Advanced Photo System film can record data from the camera both magnetically and optically. This data is used to improve the image quality. Advanced Photo System is a system worthy of starting a new era in photography.

The “IXY,” Canon’s first Advanced Photo System camera was released in April 1996. It measured 60mm (H) and 90mm (W), which was 30% smaller than the conventional compact cameras. The camera body was purposefully made of a stainless steel alloy (SUS316) to add an appropriate heft to the camera. The small camera with ideal weight increased stability when shooting a picture and gave a sense of luxury to the users. Along with the concept of “small size, simple, and high-quality,” the operation was also designed to be extremely simple. Causing a sensation upon release, the “IXY” took the lead over other camera manufacturers’ Advanced Photo System models and Canon was widely recognized as synonymous with Advanced Photo System.

The “IXY” Aspherical Lens Smaller than a 10-Yen Coin

With the use of Advanced Photo System, the unprecedented compactness of the “IXY” was realized but Canon encountered extreme difficulties in the development process. In order to make the camera body compact, the mechanisms as well as the lens must be made smaller. In the course of determining the design policy of the IXY, the designers thought up the idea of using a 10-yen coin to show how compact their design was. They found that the cross-section of 6 element/6 group aspherical lens they envisioned had a shorter diameter than that of a 10-yen coin. Their demonstration did the trick and they finally got the approval to proceed with the design.

Transition to the Digital Video Camcorder

The wave of digitalization also affected the SV camera that recorded images on a dedicated floppy disk for viewing on a television. The personal computer was rapidly spreading everywhere and the demand from those wanting to load images into the computer sprang forth not only from the users, but from the development team as well. The most appropriate digital recording technology began receiving great attention. However, in the early‘90s, image sensor devices (CCD) did not have the capacity to produce highly refined images. Also, semiconductor memory like CompactFlash (CF), which is prevailing nowadays, was too expensive at the time. It was difficult to foresee if a camera that recorded an image as a digital signal would be widely accepted.

With the high-quality SV camera “RC-570″ released in 1992, Canon stopped production of the SV camera and switched to digital cameras. In 1995, the “EOS DCS” was released jointly with Eastman Kodak as a line of digital cameras for professional use, and later in July 1996, a model for the general user, the “PowerShot 600″ was marketed. The “PowerShot 600,” which used a CF or a PC card as the recording media, marked the full scale start of Canon’s digital camera era.