One crucial material that supports the high image quality characteristic of Canon lenses is fluorite, which is a crystallized form of calcium fluoride. It has long been known that using a fluorite lens in conjunction with a glass lens can reduce chromatic aberration to extremely low levels. However, natural fluorite occurs in small sizes that are suitable only for use in small optical equipment such as the object lenses of microscopes. Canon, in its pursuit of progress in imaging capabilities, was keen on utilizing fluorite in its photography lenses, set out to develop its own technology for forming large, high-purity artificial fluorite crystals using fluorite ore as a raw material. In May 1969, the FL-F300mm f/5.6—the world’s first consumer telephoto lens to employ fluorite lens elements—was released.

You might have noticed the outlines of your subjects tinted in a way that resembles a color fringe. This is chromatic aberration, and it can also take the form of a haziness throughout the entire image. As this prevents the subject from being rendered accurately, it needs to be corrected so that the image quality is sharp, clear, and faithful to the scene. 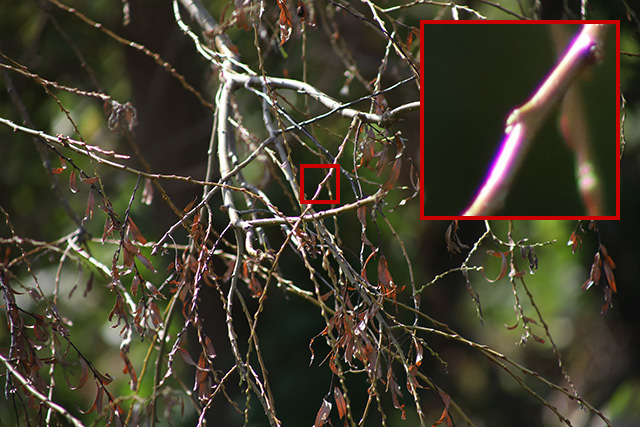 The purple fringing at the edges if these branches is a form of chromatic aberration.

Chromatic aberration happens because when light passes through a glass surface, the different-colored waves within it (red, green, blue, etc.) are refracted at different angles due to their different lengths, with each color converging at a different focal point. Such aberration is usually corrected by using a combination of concave and convex lenses, which refract the light in opposite directions to each other. 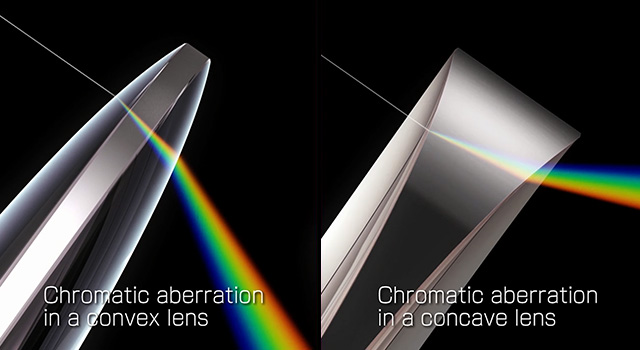 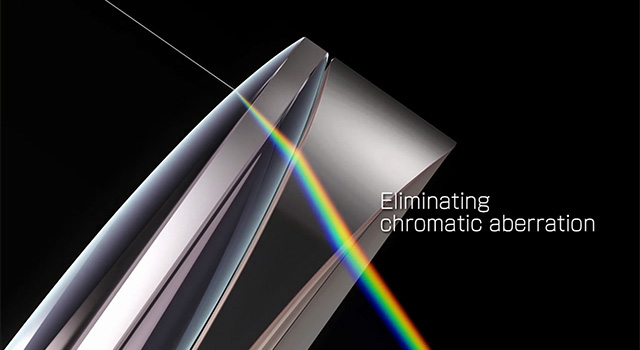 This is where fluorite comes in handy. As fluorite is a fundamentally different material than conventional optical glass, it can be used in combination with glass to correct chromatic aberration more effectively. It is particularly effective on telephoto lenses, where the long focal length exacerbates chromatic aberration. 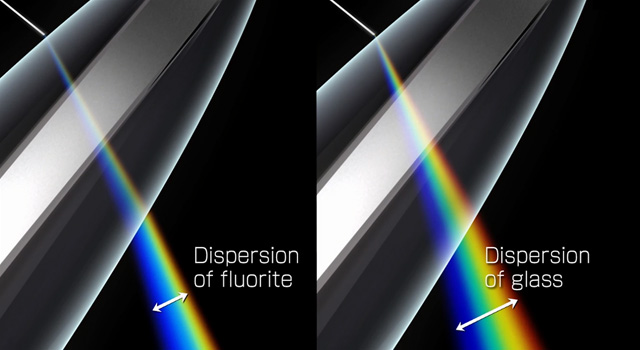 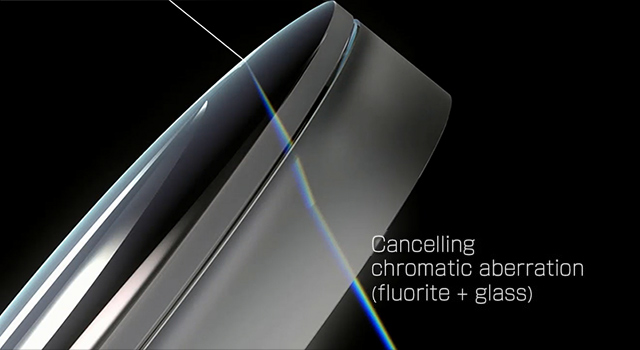 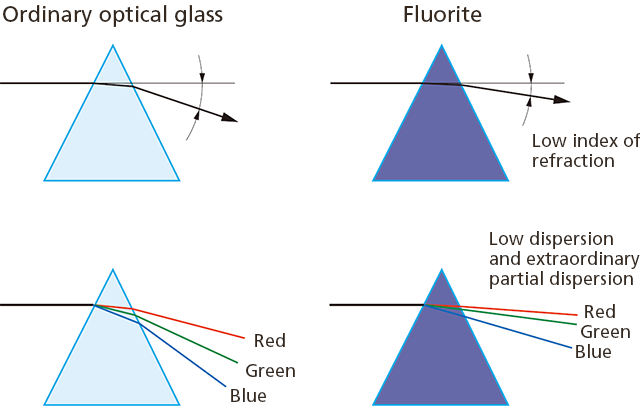 ‘Refraction’ is the phenomenon in which light changes direction when it passes through the surface of a material such as glass. The degree of the directional change is called the ‘refractive index’. As the refractive index varies depending on the color constituents (wavelengths) of the light, each color bends in a different direction. This is known as color dispersion. On optical glass, dispersion occurs at a fixed proportion regardless of the wavelength, whereas on fluorite, dispersion occurs at different proportions for different wavelengths and is known as ‘extraordinary partial dispersion’.

Fluorite lenses transcend traditional limitations to reduce chromatic aberration to an extremely low level. These lenses have their origins the Canon F Project, which started in August 1966. Canon’s lens developers strongly believed that to create a lens that was performed better than existing lenses, it was first necessary to create a new material, and it was this conviction that drive them to establish the technology for producing artificial fluorite crystals to use in camera lenses.

The challenge in producing artificial fluorite crystals lay in the crystallization. The term “glass” was originally used to describe the state of a material. Being non-crystalline, it consists of atoms fixed in random positions--simply melting glass allows it to be processed into different shapes. On the other hand, fluorite is a crystalline substance, and its constituent atoms must be arranged in a specific configuration for it to crystalize.

To pulverize natural fluorite, purify it, and then restore the exact atomic structure to recrystallize it into a size large enough for application in a camera lens is a near-impossible feat. Therefore, the developers had to ensure a precisely controlled vacuum environment where the temperature is kept at least 1,000℃, so they designed an apparatus to artificially produce large crystals with high purity In 1968, two years after the F project started, Canon finally managed to overcome these obstacles to successfully form artificial fluorite crystals large enough to be used in camera lenses. 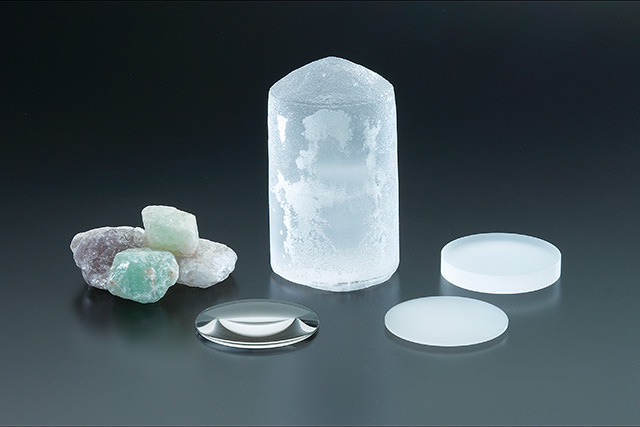 The stones on the left are natural fluorite crystals. They are green and purple due to impurities within the crystals. At the middle is an artificial fluorite crystal ingot produced by Canon.
When heated, natural fluorite glows with a dreamy light that resembles that of fireflies, which is said to be the reason behind its Japanese name, hotaru ishi, literally “firefly stone”. Just like how fireflies require clean water to live, only pure fluorite can “shine” as photography lenses.

Another challenge in fluorite lens production is its polishing. As fluorite is softer and more delicate than glass, the same methods used for polishing glass are not suitable. Therefore, Canon developed a special technology for polishing fluorite lenses that requires up to four times longer than the time needed to polish ordinary optical glass. This technology was successfully commercialized the following year, in May 1969.

The FL-F300mm f/5.6, whose successful commercialization was achieved by transcending many challenges, was highly acclaimed for is vivid, high-contrast rendering, and became widely used in such professions as photojournalism.

Canon subsequently improved on is high temperature vacuum, temperature control, and polishing technologies, enabling the use of fluorite lens elements in many more lenses. Canon remains committed to pursuing the highest image quality for its telephoto lenses.

While the grinding and polishing processes may seem identical for all kinds of optical glass, each stage of the fluorite lens production process requires slow, meticulous attention to detail. 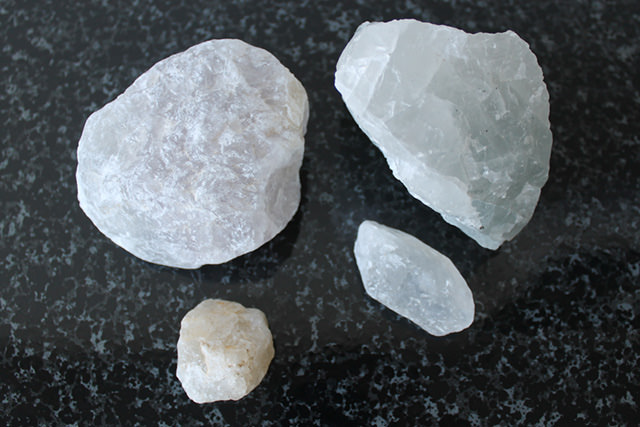 2. Pulverization and refinement
The raw fluorite is pulverized and refined to remove impurities before being poured into a graphite crucible that does not melt easily. 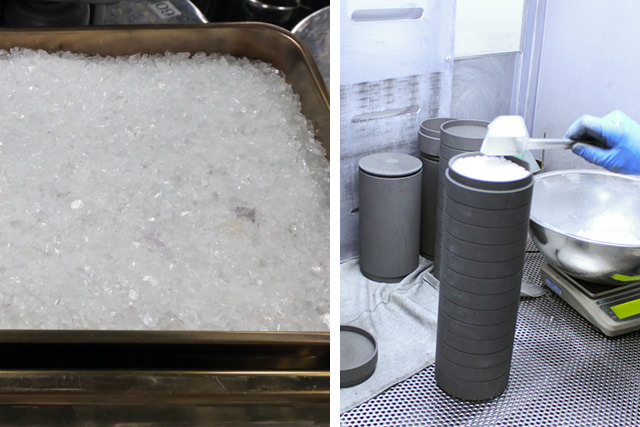 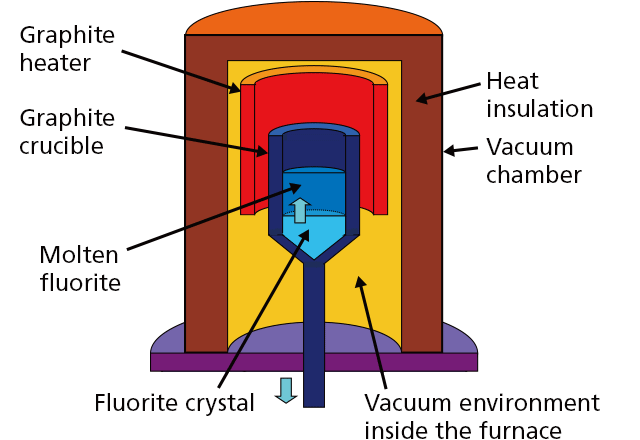 4. Annealing
The annealing process removes strains that occur inside the crystals formed. Strain that lead to cracks are removed by heating the crystals to a high temperature insufficient to melt them, and then slowly cooling them to room temperature over a long period of several weeks. 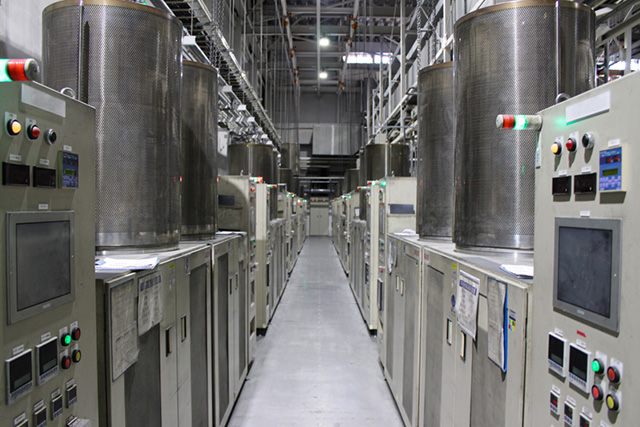 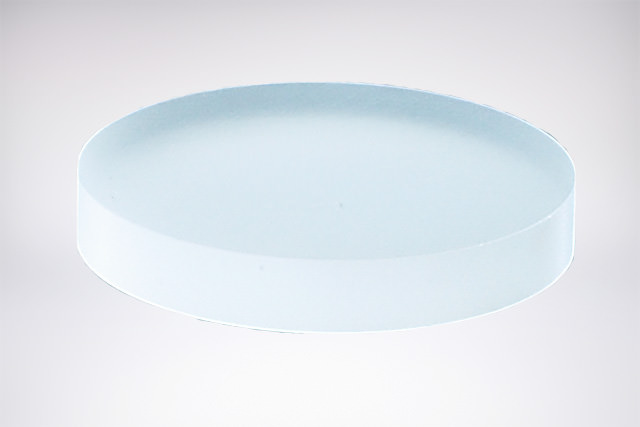 6. Grinding
The top and bottom surfaces of the crystal are ground into a spherical shape with a surface that resembles frosted glass. 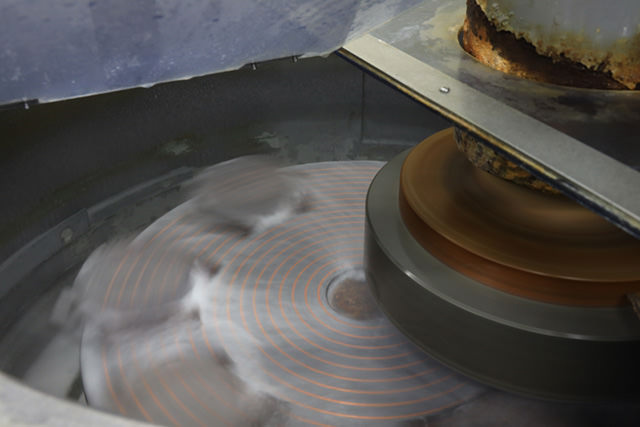 7. Polishing
The surfaces of the crystal are polished with a pellet made from coagulated polish until they are semi-transparent and meet the specified dimensions. Finally, a special polish is used to remove fine scratches. 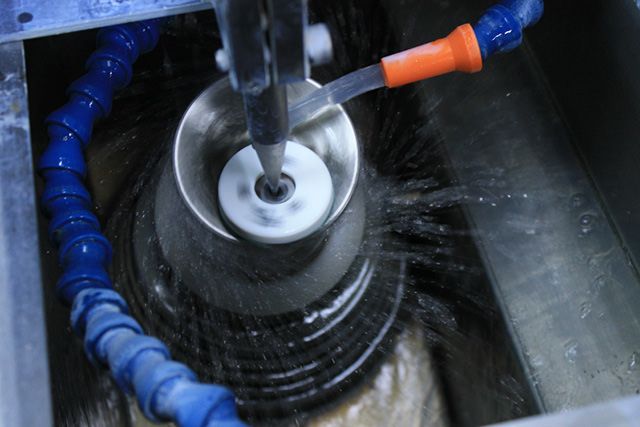 8. Vapor deposition
Coating material is heat-evaporated under high vacuum conditions up to one-millionth to one-hundred millionth of one unit of atmospheric pressure. This forms a thin film over the polished lens. 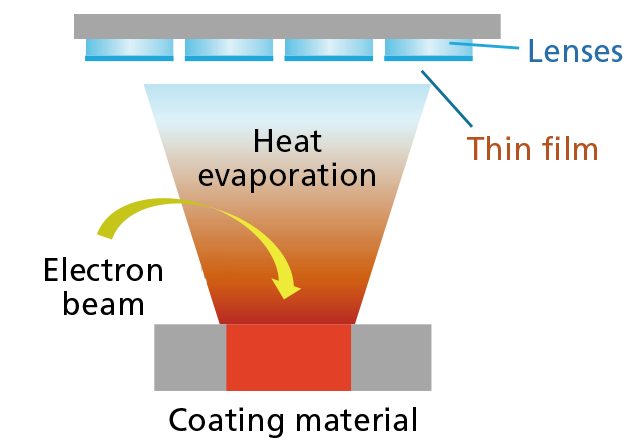 9. Completion
An experienced technician inspects purity using an interferometer. Only lens elements that pass the inspection are sent to be assembled in lenses. 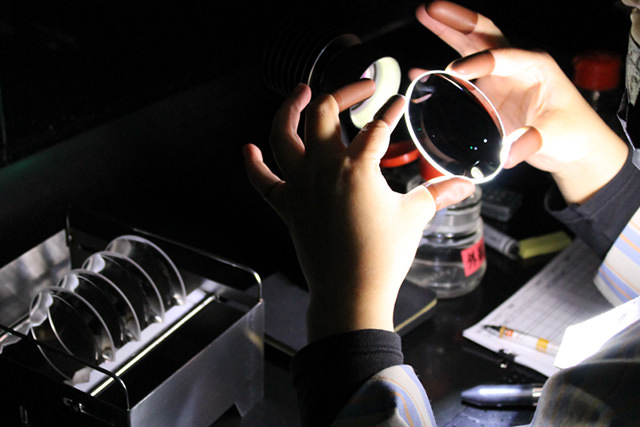 Lenses that employ fluorite lens elements (as at May 2021)

Since the FL-F300mm, Canon has produced 39 more lenses that employ fluorite lens elements. As fluorite lens elements not only correct chromatic aberration but also contribute to reducing the size and weight of products, they are proactively used in large telephoto lenses.
These lenses are much beloved by many photographers who demand high image quality at super telephoto focal lengths, including not only professional sports photographers and photojournalists, but also enthusiasts who photograph subjects such as wild birds, trains and aircraft. 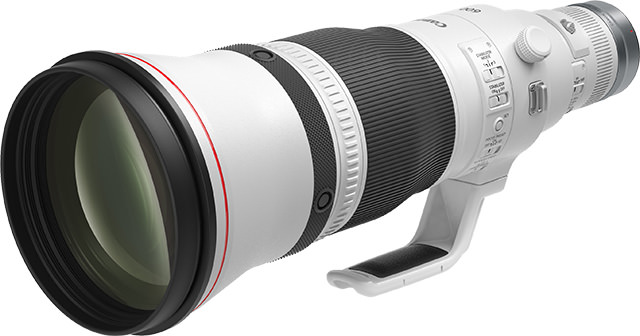 RF lenses that employ fluorite lens elements (as at May 2021)