The Camera Grand Prix, the most prestigious award in Japan's photo industry, is sponsored by the Camera Journal Press Club Japan (CJPC), comprising thirteen photography and camera publications (as of May 2009). The Camera Grand Prix selection committee is made up of chief editors of CJPC member publications, academic experts, technical writers, professional photographers, and representatives from photo-related organizations. The coveted Camera of the Year 2009 was awarded to the most impressive camera released in Japan between April 1, 2008, and March 31, 2009.

The Camera Grand Prix, founded in 1984, marks its 26th anniversary this year. The 2009 Camera of the Year award marks the eighth time that a Canon camera has earned top honors at the Camera Grand Prix, and the first since the top prize went to the EOS-1Ds, the industry's first professional-model digital SLR camera to feature a 35mm full-frame CMOS sensor.

This year's title-winning EOS 5D Mark II was recognized for its range of high-performance features, including a newly developed full-size 21.1-megapixel CMOS sensor, the next-generation DIGIC 4 image processor and a sophisticated Live View function, along with its advanced image quality and ease of use. Additionally, the model earned high marks as the world's first SLR camera to enable the recording of full HD video as well as for its outstanding cost performance. 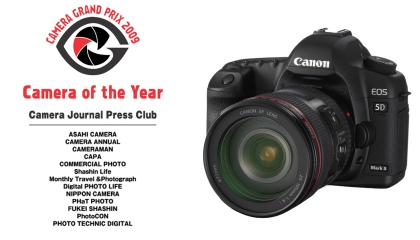