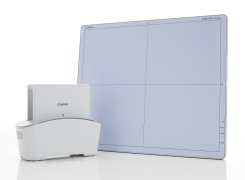 Canon is currently carrying out such efforts as further reducing the weight of the CXDI-70C Wireless and accelerating the development speed, with the aim of realizing a market launch in the latter half of 2010. The new model is positioned as a high-end DR system, along with Canon's commercially available CXDI-55G/55C, which has enjoyed a favorable reception since its release in 2009.

The CXDI-70C Wireless incorporates a new Canon-developed glass substrate with a pixel pitch of 125 microns and, despite realizing a higher resolution as compared with the company's current 160-micron pixel-pitch DR systems, the new model delivers an increased level of sensitivity. In addition, the unit features a Cesium Iodide (CsI) scintillator, which delivers high-quality images while reducing X-ray exposure for the patient.

Canon will be displaying a prototype version of the CXDI-70C Wireless at the Canon booth during the ECR (European Congress of Radiology) 2010 in Vienna, Austria, from March 4 to 8, 2010.