TOKYO, September 15, 2011—Canon Inc. today announced that an ultra-large-scale, ultra-high-sensitivity CMOS sensor developed by the company has enabled the video recording across a wide 3.3° x 3.3° field of view of meteors with an equivalent apparent magnitude of 10.*1 The sensor, with a chip size measuring 202 x 205 mm, the world's largest*2 surface area for a CMOS sensor, was installed in the Schmidt telescope at the University of Tokyo's Kiso Observatory, Institute of Astronomy, School of Science (Kiso-gun, Nagano prefecture). 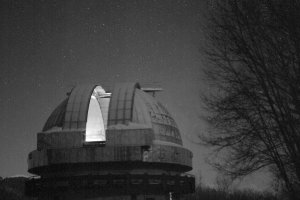 The Kiso Observatory observation dome
(Photographed with an ultra-large-scale, ultra-high-sensitivity CMOS sensor amid illumination of 0.1-0.3 lux) 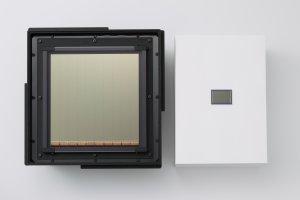 With a chip size of 202 x 205 mm, the ultra-large-scale, ultra-high-sensitivity CMOS sensor, developed by Canon last year, is among the largest that can be produced from an approximately 300-mm (12 inch) wafer.*2 The device is approximately 40 times the size of Canon's largest commercial CMOS sensor*3 and makes possible video recording in dark conditions with as little as 0.3 lux*4 of illumination. In January this year, the CMOS sensor was installed on the focal plane of the Kiso Observatory's 105 cm Schmidt telescope and used to record video at approximately 60 frames per second, resulting in the successful video recording of faint meteors with an equivalent apparent magnitude of 10 across a wide 3.3° x 3.3° field of view.

Statistical analysis of the video data could lead to an increased understanding of the influence that meteors may have exerted on the development of life on Earth.

Additionally, because the combination of the CMOS sensor and Schmidt telescope facilitates the highly efficient investigation of objects traveling at high speeds across the sky, it makes possible the detection of an increased number of celestial phenomena in addition to meteors, such as space debris*5 and heavenly bodies moving in the solar system. Accordingly, the technology is expected to contribute to improved measuring accuracy in determining the position and speed of these objects.

Through the further development of distinctive CMOS image sensors, Canon will break new ground in the world of new image expression, in the areas of still images as well as video.

The results of the abovementioned observations will be presented at the Astronomical Society of Japan's autumn 2011 meeting, which will be held from September 19 (Mon.) to 22 (Thu.) at Kagoshima University in Kyushu, Japan.