In addition to compatibility with industry-standard Super 35 mm-equivalent cameras, the four cinema zoom lenses will offer exceptional optical performance to support video recording using 4K-resolution cameras. Delivering superior mobility and utility, the zoom lenses will feature compact, lightweight bodies that were designed with such uses as handheld shooting in mind, while covering a wide focal length range. When combined with the previously announced single-focal-length cinema lenses from the EF Cinema Lens series, the four new lenses will easily enable a variety of visual expression possibilities. While further details regarding the four cinema zoom lenses currently under development, including specifications and pricing, have yet to be decided, plans call for the lenses to be launched during 2012.

Canon will be displaying prototypes of the cinema zoom lenses at NAB Show 2012, one of the world's largest events for the video, broadcasting equipment and digital media industries, from April 16 to 19 in Las Vegas, U.S.A.

Canon will continue to enhance its Cinema EOS System product lineup to support diverse imaging creation in the motion-picture and other digital high-resolution production industries, contributing to further expanding the possibilities in visual expression and the development of cinematic culture. 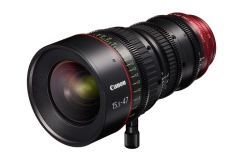 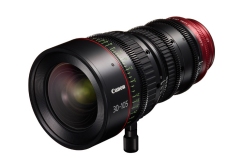