TOKYO, December 3, 2014—Canon Inc. and Canon Marketing Japan Inc. today announced that 2015 will mark the 25th anniversary of the introduction of the Canon Toner Cartridge Recycling Program, the goal of which is to achieve zero landfill waste by reusing parts, recycling materials and employing energy recovery. First launched in 1990, the program now carries out collection operations in 26 countries worldwide and, as of the end of December 2013, has collected approximately 320,000 metric tons of used toner cartridges. 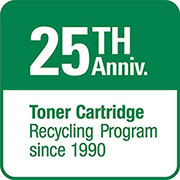 In October 1982, Canon launched the PC-10 and PC-20, the world's first personal copying machines to incorporate replaceable all-in-one toner cartridges. The toner cartridges were then adapted for use in laser beam printers and rapidly gained in popularity amid increases in sales volume. Along with these developments, Canon, as a result of the Company's awareness of such environmental issues as reducing waste and the effective use of resources, and in accordance with its corporate philosophy of kyosei—living and working together for the common good—independently introduced the Toner Cartridge Recycling Program in 1990. The initiative, launched on a global scale by a single company with no cost to customers, marked a watershed moment within the industry.

While Canon works to address various environmental issues, resource recycling is one area in which the Company focuses particular attention. Canon toner cartridges make possible closed-loop recycling through a product design that assumes recycling after use, facilitating the reuse of components and the recycling of plastic for new products that realize equivalent levels of quality. As a result, since 2003, all four of Canon's recycling bases continue to carry out resource recovery that does away with landfill waste and, as of the end of December 2013, the Company has reduced the use of new resources by approximately 220,000 metric tons and CO2 emissions by approximately 480,000 metric tons.

On the occasion of the Canon Toner Cartridge Recycling Program's 25th anniversary, next year the Company plans to expand its recycling-themed eco-lesson visits to elementary schools in Japan. Featuring an experiment involving the separation of materials made of plastics and metals, these special lessons will complement science classes taught at the schools, providing insight into the properties of various materials.

Additionally, the same experiment will be presented at the Eco-Products 2014 exhibition in Japan, which will be held from December 11 to 13 at Tokyo Big Sight (Tokyo International Exhibition Center). 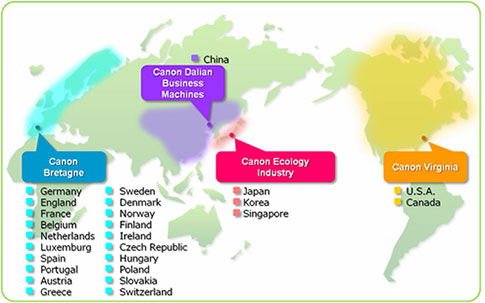 Global recycling bases and countries where cartridges are collected 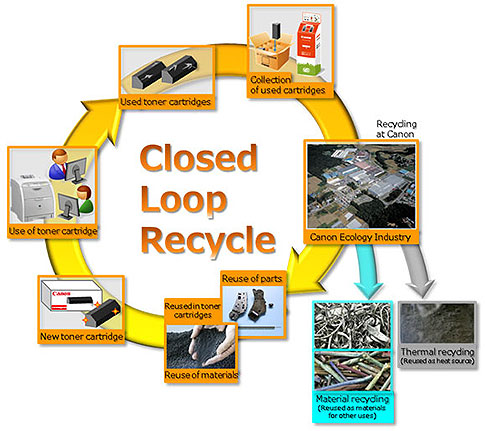 Breakdown of Toner Cartridge Recycling (by mass)
(Results for 2013)