TOKYO, Japan, August 7, 2015—Canon, as an Official Partner of the IAAF World Championships Beijing 2015, will provide support for the event through a range of activities. 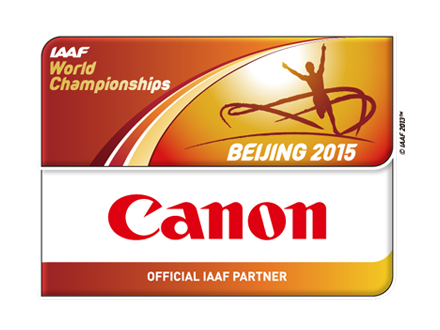 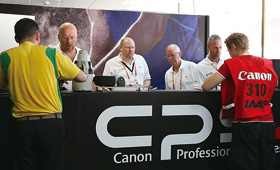 Canon is an Official Partner of the International Association of Athletics Federations (IAAF) World Athletics Series, sponsoring a total of 15 IAAF World Athletics Series events from 2013 to 2016. The IAAF World Championships Beijing 2015, which begins on August 22, is a global competition that will bring together more than 2,000 athletes from over 200 countries and territories. The previous Championships, held in Moscow in 2013, was broadcast in 192 countries and regions, attracting strong interest from a wide international television audience.

At the IAAF World Championships Beijing 2015, Canon will display the Company's logo on signage within the venue, provide support through its products, technologies and services, and carry out a range of related activities, including those listed below.

At numerous sporting competitions both in Japan and overseas, Canon provides behind-the-scenes support to members of the press covering these events, including technical support, advice and repair services, as well as loans of the latest Canon EOS camera and lens equipment. To further improve media support at the IAAF World Championships Beijing 2015, expert Canon staff at the on-site camera service center will assist the many sports photographers from various countries and regions across the world. Additionally, all accredited photographers covering the event will wear bibs displaying the Canon logo.

Canon will incorporate within the Company's homepage a dedicated IAAF World Championships Beijing 2015 website that provides a range of tournament-related information, including competition schedules and major attractions. Additionally, the site will include a link to the Canon Photo of the Day, which, featured on the IAAF official website during the competition, will present one image per day carefully selected from among the many captured daily during the event. Visitors will be able to enjoy breathtaking images of the athletes in action, captured by top sports photographers supported by the outstanding imaging performance of Canon cameras and lenses.