TOKYO, March 28, 2016—Canon Inc. announced today that the Company will begin accepting entries for its New Cosmos of Photography 2016 (39th edition) photo competition on April 20. The New Cosmos of Photography is Canon's cultural support project to discover, nurture, and support new photographers who pursue new possibilities in creative photographic expression. Aiming to incorporate diverse perspectives, the number of judges for this year's competition will be increased to seven toward the realization of an even more open photo exhibition. 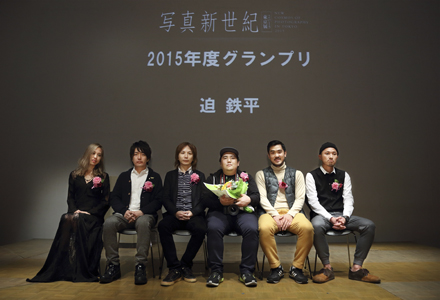 The six Excellence Award winners from the 2015 competition

The Grand Prize winner of this year's competition will receive not only JPY 1 million in prize money and a Canon product, but as an added bonus will be granted the right to hold a solo exhibit at the exhibition of winning entries for next year's New Cosmos of Photography. Additionally, to encourage the continued pursuit of their creative activities, 2016 Excellence Award and Honorable Mention Award winners will each receive prize money and the right to display their works at this year's exhibition of winning entries.