TOKYO, February 14, 2019—Canon Inc. today announced that the company is pursuing development of six RF series interchangeable lenses for the RF mount to be released during 2019. Taking full advantage of the features of the RF mount—the same large 54 mm internal diameter as the EF mount and a short back focus1—RF lenses realize dramatically increased flexibility in lens design compared with existing EF lenses. With the addition of these attractive lens models, Canon aims to strengthen the capabilities of the EOS R System. 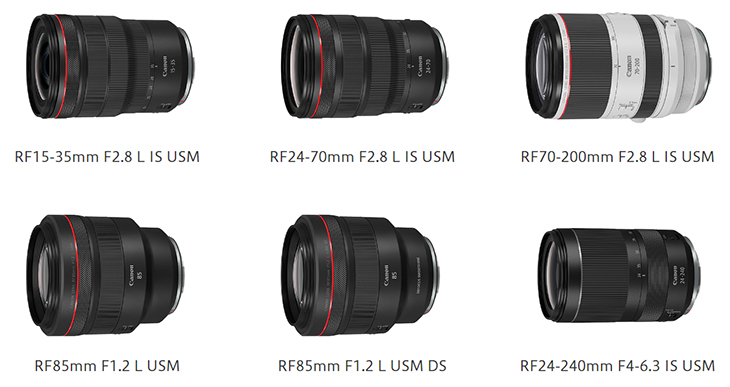 On September 5, 2018, Canon announced the EOS R System of cameras and lenses, a new imaging system that offers greater flexibility in lens design and expands the possibilities of optics, releasing four RF lenses one after another. These are the core of the RF System, which employs the newly developed RF mount.

Now, development is underway for six new RF series lenses for 35mm film-equivalent full-frame EOS R Series cameras—the RF15-35mm F2.8 L IS USM, RF24-70mm F2.8 L IS USM and RF70-200mm F2.8 L IS USM, which feature an f/2.8 aperture throughout the entire zoom range; the RF85mm F1.2 L USM and RF85mm F1.2 L USM DS fixed-focal-length lenses with a fast f/1.2 aperture; and the RF24-240mm F4-6.3 IS USM, which covers an extensive zoom range. Price and additional specification of the lenses will be announced at a later date.

The essence of photographic and videographic expression is the manipulation of light, which requires lenses. Going forward, Canon continues to pursue ideal lenses that realize descriptive performance with higher resolution and contrast. What's more, on December 19, 2018, Canon reached a new production milestone of 140 million EF lenses2, reinforcing its position as the world's highest-volume manufacturer of interchangeable lenses. True to the development concept of the EOS Series established in 1987—speed, comfort and high image quality—the company will continue to expand the boundaries of photographic expression and enable users to achieve innovative image capture. Through ongoing efforts to deliver attractive and reliable products, Canon strives to contribute to the further development of photo and video culture.

With the demanding needs of enthusiast and professional photographers in mind, Canon is pursuing the development of three large-aperture lenses for wide-angle (15-35 mm), standard (24-70 mm) and telephoto (70-200 mm) zoom shooting that feature fast f/2.8 apertures across the entire zoom range to facilitate easy adjustment of such settings as exposure. Utilizing the large-diameter mount and short back focus made possible by the RF mount alongside such features as image stabilization (IS), the lenses embody Canon's mission to achieve high image quality, high performance and compact design. In developing a new lineup of F2.8 L IS zoom lenses as part of the Company's L (Luxury) Series—which pursue the highest standards of descriptive performance, operability and durability—Canon aims to expand the possibilities of visual expression for users.

The RF85mm F1.2 L USM DS features a similar optical design to the RF85mm F1.2 L USM while achieving Defocus Smoothing (DS), a distinct soft bokeh rendering with smoother edges made possible through the use of proprietary deposition technology currently under development, making it ideal for portrait shooting.

Canon is currently developing the RF24-240mm F4-6.3 IS USM, a compact and lightweight lens—ideal for use with the EOS R (released on October 25, 2018) and the EOS RP (to be released in mid-March 2019)—that covers an extensive focal length range from 24 mm at the wide angle end to 240 mm at the telephoto end. Thanks to its zoom range, the lens is suited to a variety of shooting scenarios, including travel, snapshots, landscape and portrait photography as well as videography.

Mock-ups of these six lenses will be on display as a reference exhibit at the Canon booth during the CP+ Camera and Photo Imaging Show 2019 to be held at the Pacifico Yokohama convention center from February 28 to March 3.