Today marks the opening of Rugby World Cup 2019 in Japan.
As an official sponsor, leading up to the final Canon is collecting rugby-related photos from fans via such social media as Instagram and Twitter to create mosaic art of the winners' trophy, the Webb Ellis Cup. Canon is looking forward to receiving photos of rugby goods, smiling rugby fans and, of course, the exciting scenes taking place at the matches themselves! 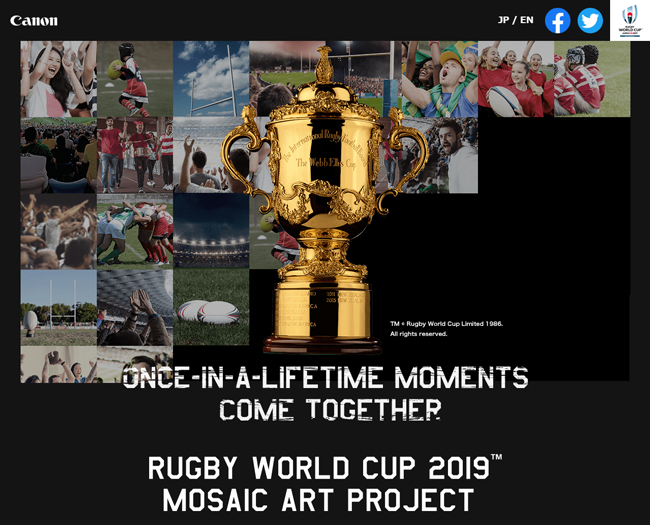 Canon will be accepting entries from September 20 until 23:59 (JST) on October 13. Entrants can participate by simply uploading a photo to Instagram or twitter with hashtag #rwc2019art and can even upload multiple entries.

Where can you find the finished mosaic art?

■Dedicated website
(To be made available from late October until late December)
Use the enlarge function to find your own photos!
■Final match
November 2 at the event area* of International Stadium Yokohama

★ What is the Webb Ellis Cup?

The Webb Ellis Cup is the trophy bestowed upon the winners of the Rugby World Cup final. The gilded-silver cup has a handle adorned with the head of a satyr and another with the head of nymph and is decorated with a bearded mask, a lion mask and a grapevine motif.
The cup was named after William Webb Ellis, who supposedly originated the game in 1823 as a young boy attending Rugby School in England.