Canon launched the CXDI-11, the world's first static-image DR system, in 1998, and since that time has introduced nine generations of flat panel technology with a variety of products, including general DR sensors for use in upright stands, universal stands and imaging tables, as well as portable DR sensors. Now, with the development of its new system, Canon announces its crossover to the dynamic imaging market.

Building on the outstanding image quality and speed of the CXDI series for radiography, Canon developed a compact, lightweight DR system capable of both viewing moving images and capturing static X-ray images. While the newly developed prototype accommodates standard static X-ray image capture of the chest area and extremities, it also enables "X-ray fluoroscopy," which radiographers can use to observe dynamic images of internal organs, such as those used in digestion, for optimal timing in capturing static images. Canon is currently developing the system for a commercial release, which it plans for the latter half of 2009.

Improving and expanding the lineup of its X-ray DR systems to include a system capable of capturing both fluoroscopic and radiographic images will allow Canon to further expand the market for these products, as well as support the advancement of medical institutions for digitization and soft copy diagnostic reading. In this way, Canon will continue to contribute to the medical community through increased diagnostic assistance and efficient patient procedures.

Canon will be displaying a prototype version of the new system at the Canon U.S.A. booth #8313 during the 94th Scientific Assembly and Annual Meeting of the Radiological Society of North America in Chicago, Illinois, from November 29 to December 4, 2008. 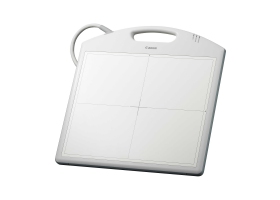 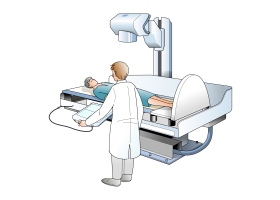 Usage example
(When used with an imaging table)