TOKYO, January 6, 2009—Canon Inc. and Canon Marketing Japan Inc. today commemorated the 50th anniversary of the sale of Canon's first single-lens reflex camera in 1959. Over the past half-century, Canon SLR cameras have evolved with the times, incorporating advanced and groundbreaking technologies. Winning the widespread support of users worldwide, production of Canon SLR cameras have already surpassed the 50-million* unit mark.

The history of Canon 35 mm single-lens reflex cameras began in May 1959 with the launch of the Canon Flex, which was followed by models reflecting Canon's reliable technologies and innovativeness. In 1971 the company introduced the F-1, its first professional model; in 1976 the AE-1, the world's first SLR camera to feature a built-in CPU; and in 1986 the T90, the top-of-the-line model of the T series lineup.

In March 1987, Canon launched the EOS650, the world's first AF (autofocus) SLR camera to realize electronic control for the entire system. The EOS series, which continues to this day, has contributed significantly to the popularization and development of AF SLR cameras, fueling dramatic growth among both professional users, with the introduction of the top-of-the-line EOS-1 in 1989, as well as entry-level users, with the release of the EOS Kiss (EOS Rebel XS or EOS 500 in regions outside Japan) in 1993.

The year 2000 marked Canon's full-fledged entry into the digital era with the launch of the EOS D30. Canon's EOS Digital series, based on the key concept "speed, ease-of-use and high image quality," has consistently led the digital evolution of SLR cameras with Canon-developed CMOS sensors and the high-performance DIGIC image processor, along with the company's EF lens lineup, boasting outstanding optical performance and an extensive selection.

In 2008, Canon further strengthened its digital SLR lineup with the introduction of four new models, including the EOS Kiss X2 (EOS Rebel XSi or EOS 450D), which garnered the top share in Japan and other global markets, and the EOS 5D Mark II, the first SLR camera to incorporate full high-definition video recording.

With film-based SLR camera sales of more than 39 million units and digital SLR camera sales exceeding 14 million units, Canon is sincerely grateful to all of its users for their support and will continue pursuing the challenge of creating cameras that deliver superior imaging performance and reliability. 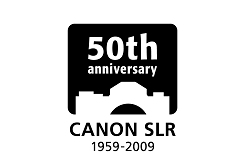