TOKYO, April 4, 2011—We at Canon extend our heartfelt condolences to all those affected by the Great East Japan Earthquake and pray that the region will soon be able to begin the rebuilding and healing process.

To aid the relief efforts in areas hardest hit by the massive earthquake on March 11, Canon Inc. is supporting the medical activities of the Japanese Red Cross Society through the donation of five portable digital radiography systems.

The portable DR systems, built around Canon's medical-use CXDI-55G multipurpose portable flat panel detector, enable out-of-hospital X-ray examinations in a variety of situations in which medical-exam vehicles are incapable of responding. Such DR systems have contributed to medical activities in disaster areas with limited healthcare resources, including the major earthquakes that struck Sumatra, Indonesia, in 2009, and Haiti in 2010. Following the Great Sichuan Earthquake in 2008, Canon (China) Co., Ltd. donated a DR system to the Mianyang City Central Hospital, which played an integral role in disaster-stricken areas.

As announced on March 12, the Canon Group made a donation of 300 million yen to aid in relief efforts for earthquake victims. Additionally, Canon employees in Japan, the United States, Europe, Asia and Oceania are conducting activities to raise money that will also be used to support the recovery of affected areas. 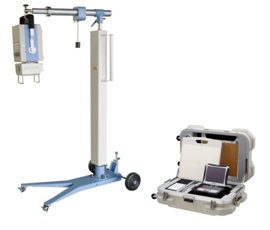