TOKYO, November 13, 2014—Canon Inc. announced today that the Company has been entrusted with the responsibility of processing the 30-meter-diameter multi-segment primary mirror to be incorporated in the Thirty Meter Telescope (TMT) currently under construction near the summit of Mauna Kea, Hawaii. 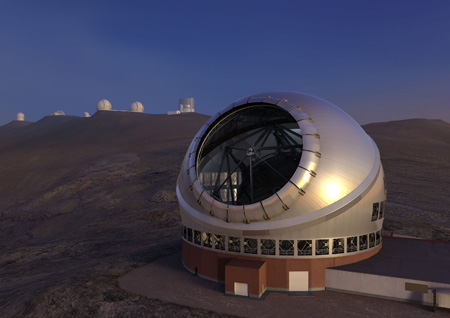 The creation of the TMT, a next-generation extremely large telescope, is being made possible through the cooperative efforts of Japan and four other countries. Construction of the telescope began in 2014 with completion scheduled for the early 2020s. Japan will handle the processing of approximately 30% of the 492 segments (574 when including replacement segments) that make up the TMT's primary mirror. Of the processing being handled by the team from Japan, Canon is currently responsible for grinding 26 segments and has already begun work.

The TMT's primary mirror will comprise an array of 492 hexagonal segments, each of which measures 1.44 meters diagonally with a thickness of 45 millimeters. The segments will be closely arranged, separated by gaps measuring only 2.5 millimeters wide, to create the 30-meter-diameter primary mirror. The primary mirror's construction requires the production of six each (seven when including replacement segments) of the 82 uniquely shaped segments used to create the mirror.

The processing work that Canon is responsible for requires that segments be processed at a level of precision measuring less than 2 microns Peak-to-Valley (P-V), a value that indicates differences in surface levels. This degree of precision is comparable to a variation in the surface evenness of the playing field housed in the Tokyo Dome sports stadium of less than 0.2 millimeters. To produce the segments, Canon is drawing on its various optical technologies cultivated through the manufacture of lenses and mirrors, namely grinding and polishing technologies, aspherical surface processing technologies, and measuring technologies. In particular, Canon will make use of its proprietary tools when grinding and polishing the aspherical surfaces to ensure the proper curvature required for each segment.

In addition to Canon's involvement in the TMT, the Company provided support for the large-scale optical-infrared Subaru Telescope, also located on Mauna Kea. Canon developed and produced the corrector lens used in the Subaru's Hyper Suprime-Cam ultra-wide-field prime-focus camera. In this way, Canon will continue to use its technologies to contribute to the development of the world's science, technology and natural science fields.

Canon will be exhibiting a prototype of a segment from the TMT's primary mirror, which was ground and polished by the Company, at the 2014 International Broadcast Equipment Exhibition (Inter BEE), to be held from November 19 to 21 at the Makuhari Messe in Chiba City, located east of Tokyo.

The segments to be used in the TMT's primary mirror are produced by grinding and polishing the front and back surfaces of a circular glass material that is then subjected to spherical and aspherical processing. After cutting the glass into a hexagonal shape and adding holes, it is mounted on a Segment Support Assembly (SSA), a mechanism that enables precise adjustments to ensure the proper positioning of each mirror segment.

The TMT, which is currently being constructed near the summit of Mauna Kea, Hawaii, is scheduled to be completed in the early 2020s. The project is a collaboration between five countries: Japan, the United States, China, India and Canada. Japan is providing one-fourth of the cost to construct the TMT, which totals approximately 150 billion yen. In addition to the processing of the multi-segment primary mirror, which Canon is carrying out, the team from Japan is in charge of such tasks as producing the glass material used in the segments, as well as the design and construction of the telescope's structure.

The TMT will have thirteen times the light-gathering power and four times the resolution of the Subaru Telescope, which is currently conducting observations from the summit of Mauna Kea, the same location where the TMT is being constructed. The TMT will enable more detailed observations into even farther reaches of space at a level of resolution that would enable a one yen coin in Osaka to be recognizable from Tokyoa distance of approximately 400 kilometers. Furthermore, in nearly all of its observations, the TMT will make use of adaptive optics (AO), which correct for atmospheric turbulence to enable high-visibility astronomical imaging.

Through observations using the TMT, researchers hope to identify stars dating back to the beginning of the universe and find answers to some of the mysteries of the galaxy, as well as discover planets outside of our solar system capable of supporting life.