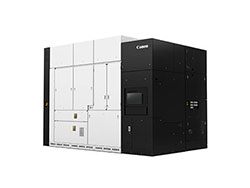 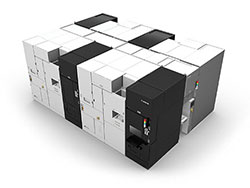 Within the leading-edge high-resolution patterning segment, where 193 nm multiple patterning has become mainstream and EUV (extreme ultraviolet)2 continues to remain in development, in 2004, Canon began conducting research into nanoimprint technology to realize sub-20 nm high-resolution processes. From 2009, targeting the mass production of next-generation semiconductor lithography systems employing nanoimprint technology, the Company has accelerated joint development efforts with Canon Nanotechnologies, Inc., which joined the Canon Group in April 2014, and a major semiconductor manufacturer. Thanks to such technological advances as the development of defect control technologies and improvements in alignment accuracy, Canon is aiming to commercialize a nanoimprint lithography system in 2015.

In nanoimprint lithography, a mold is brought into direct contact with the resist material on the substrate surface, a pattern transfer process that enables the accurate transfer of the mold's pattern and makes possible higher resolution and more uniform results compared with conventional optical lithographic approaches.3 In addition, unlike optical lithography tools, nanoimprint semiconductor production equipment does not require the use of a light source or high-aperture lens elements, making possible simple configurations and compact designs that enable users to install a cluster of systems for increased productivity.

Canon is planning to present its development progress for the nanoimprint lithography system at the SPIE Advanced Lithography 2015 conference, to be held from February 22 to 26 in San Jose, California, U.S.A.