TOKYO, September 8, 2015—Canon Inc. announced today that it has developed material appearance image-processing technology that, through the acquisition of material appearance information using digital cameras, enables printing that faithfully recreates such material appearance characteristics as gloss, plasticity and transparency, qualities that change in appearance depending on the orientation of lighting or the angle from which an object is viewed. 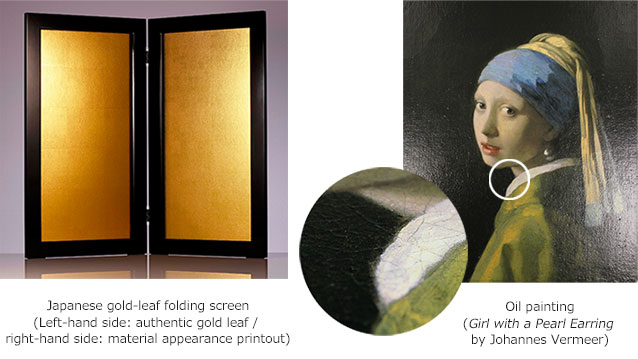 Capitalizing on Canon's expertise in image input and output devices, material appearance image-processing technology makes possible not only the high-definition representation of color characteristics, but also the printing of various material appearance qualities, such as those of metal, cloth and other materials. Additionally, as the technology is capable of faithfully recreating the material appearance characteristics of the original target object, it can be used to reproduce historically significant oil paintings and other valuable cultural properties. The creation of such reproductions could allow viewers to experience new ways of art appreciation by feeling the reproduced artwork, while enabling the original artwork to be preserved under optimal storage conditions.

In addition to the high-resolution photo printing technologies the Company has cultivated to date, Canon will further strengthen the development of this technology with the aim of expanding its application in such areas as wallpaper and other interior-use materials, advertising signage and product packaging.