TOKYO, June 12, 2018—Canon Inc. announced today that on June 9 the company successfully concluded an 8K live-video transmission experiment. Leveraging the company's input and output technologies, and in cooperation with partner companies, Canon relayed the Lipovitan D Challenge Cup rugby match between the national teams of Japan and Italy that took place at the Oita Bank Dome in Oita Prefecture, located on Japan's southernmost main island of Kyushu, to the Company's Tokyo Headquarters. 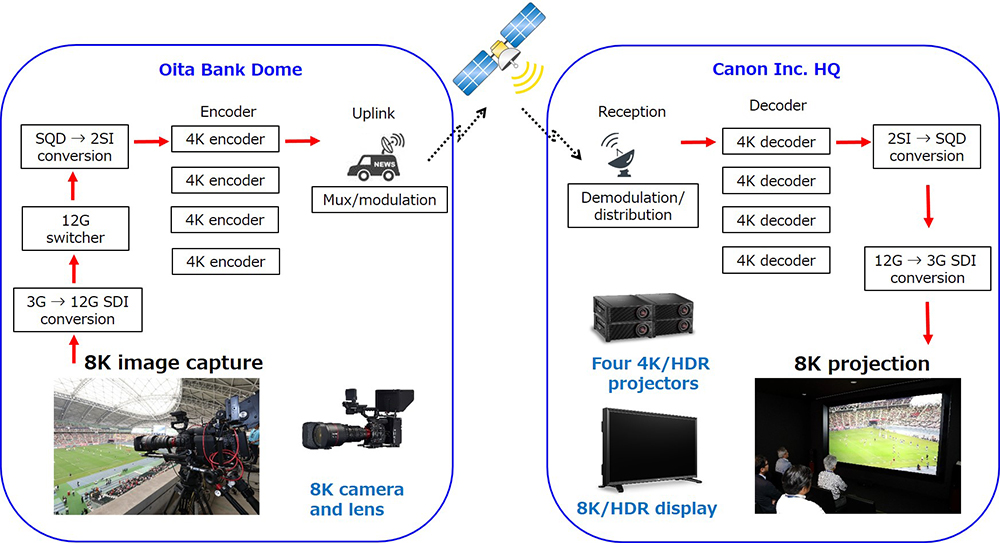 For the experiment, Canon used proprietary 8K cameras and lenses to capture footage of the match, which was transmitted live via satellite to the Company's Tokyo Headquarters where it was both screened in 8K on an 8K/HDR* display and projected in 8K using four 4K/HDR projectors. Using Canon 4K and 8K input and output technologies, the Company accomplished an immersive remote live viewing experience through expressive video images with a high dynamic range and wide color gamut.

Canon is currently developing such viewing experiences as the Free Viewpoint Video System, which makes it possible to watch sports from various viewpoints and angles, and the Spatial Imaging Solution, an immersive experience that makes viewers feel as if they are in the stadium itself by outputting high-resolution video on a large screen that covers the viewers' entire field of vision.

Canon is an official sponsor for Rugby World Cup 2019TM, Japan and, based on a sponsorship agreement with the Japan Rugby Football Union, an official supporter of the Japanese National Rugby Team. Going forward, the Company will contribute to generating interest in such sporting events as Rugby World Cup 2019, Japan through the development of imaging technology that offers realistic immersive experiences.