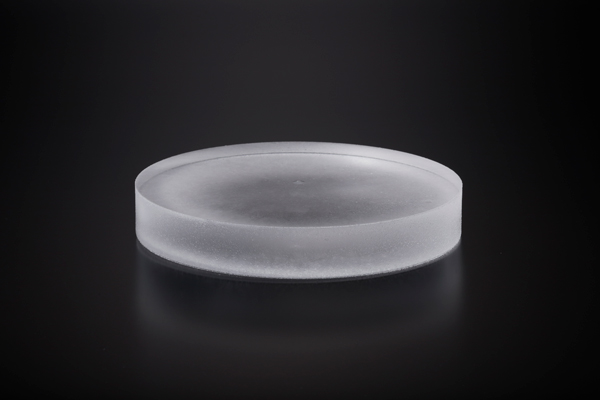 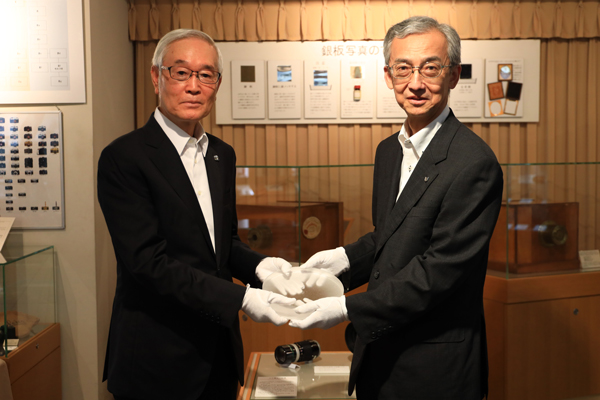 Presentation of the artificially crystallized fluorite

The JCII Camera Museum owns and displays a wealth of historically significant photos and photography-related equipment from Japan and many other countries. The museum, in recognition of synthetic fluorite's more 50-year legacy of contribution to photography, has requested that Canon Optron manufacture one of these crystals for display as part of the museum collection.

It has long been known that when combined with optical glass, fluorite, the mineral form of calcium fluoride (CaF2), can correct for chromatic aberration in a manner that is close to ideal. In the more than 50 years since Canon introduced the FL-F300mm f/5.6, the world's first consumer-grade interchangeable lens in May 1969, the company has included lens elements made using synthetic fluorite in many of its high-performance lenses. Canon Optron, in addition to producing synthetic fluorite lens elements for Canon interchangeable-lens camera and broadcast lenses, manufactures lenses for telescopes used by astronomical observatories, ultraviolet microscopes and many other types of optical equipment, helping to advance state of the optics industry.

"Fluorite possess incredibly unique optical qualities. Because of its high transmission of visible, ultraviolet and infrared light wavelengths, it has long been used in microscopes and various applications of scientific photography. While today, it is used in low-dispersion lens elements, Canon's history of use of fluorite in their high-performance lens designs spans more than 50 years. As an optical material that can be grown in a crystallized form and possesses superb characteristics, the existence of synthetic fluorite is, in my opinion, historically valuable. Starting tomorrow, it will become part of the permanent collection and displayed in the "Lens Corner" of the museum."

About the JCII Camera Museum

To date, Canon has released 37 lens models (including 28 EF lens models) that employ fluorite lens elements, with 10 of those models still produced. (As of July 2, 2020) 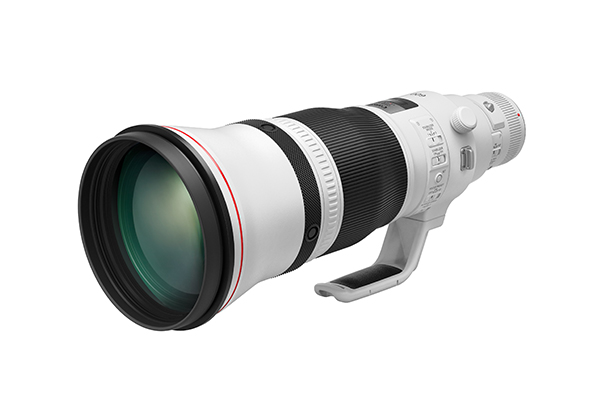 When light meets water or other transparent matter, it is refracted. Lenses are used to take advantage of this property and focus light that passes through them. However, the degree to which light is refracted depends on the color. For example, blue light, which has a short wavelength will be refracted at a steeper angle than red light, which has a long wavelength. For that reason, even light from the same source will be split by color when it passes through a lens and focused on to various different points, leading to the occurrence of color blurring known as "chromatic aberration."

Compared with optical glass, fluorite lenses have a considerably lower refraction index, low dispersion and extraordinary partial dispersion, and high transmission of infrared and ultraviolet light. Achromatic performance can be achieved by making a convex lens with fluorite, rather than optical glass, to decisively reduce secondary spectrum, causing red, blue and green light rays to almost completely converge on the same focal point to significantly reduce the occurrence of chromatic aberration.

The effects of secondary spectrum are more pronounced for telephoto lenses due to their long focal lengths. To that end, Canon employs fluorite in such contemporary lenses as the EF400mm f/2.8L IS III USM and EF600mm f/4L IS III USM (both released in December 2018). This series of telephoto lenses employing fluorite has earned strong support from photographers worldwide for their subtle rendering and high contrast.