TOKYO, November 5, 2020—Canon Inc. announced today that the Tsuzuri Project (officially, the Cultural Heritage Inheritance Project), a joint project organized by Canon and the Kyoto Culture Association (NPO), donated a high-resolution facsimile of "The Wind and Thunder Gods" by Tawaraya Sotatsu as part of the project's Stage 14. The facsimile was donated to Kenninji Temple in Kyoto Prefecture, and will be on display from November 5. 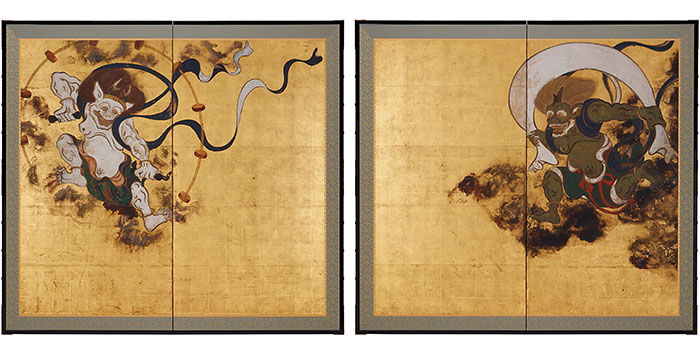 The Wind and Thunder Gods, whose original work is owned by Kenninji Temple and held in the collection of the Kyoto National Museum, is considered to be the crowning achievement of artist Tawaraya Sotatsu, founder of the Rinpa (Rin School), and one of the definitive works of Japanese culture. At the request of Kenninji Temple, the original is currently held in storage at the Kyoto National Museum and is only occasionally on display for public viewing.

To produce the high-resolution facsimiles, the original work was photographed using a high-performance EOS R5 full-frame mirrorless camera, creating a high-resolution image with more approximately 4.2 billion pixels. Combining Canon's technical expertise in imaging, processing and output with the master craftsmanship of traditional Kyoto artisans, the original work is recreated down to the finest details, including dark clouds of ink against a background of gold paper, the fine grains of the pigment and delicate brushstrokes. What's more, thanks to improved accuracy of the project's independently developed color-matching system, high-precision color matching can be completed in a short time, helping to reduce wear on the original work and making possible the production of more faithful high-resolution facsimiles.

The high-resolution facsimile of The Wind and Thunder Gods, produced with state-of-the-art imaging technology, will be donated to Kenninji Temple on November 5. The donated facsimile will be installed in the temple and available for public viewing (admission fee required).

Through the efforts of the Tsuzuri Project, original works can be preserved in more ideal environments while their high-resolution facsimiles can be widely used for public display, allowing more people the opportunity to experience the works in person.

About the Tsuzuri Project

The Project began in 2007 with two objectives—to donate high-resolution facsimiles of Japanese art abroad to their original owners, and to create high-resolution facsimiles of historical cultural assets that appear in school textbooks for use as tangible educational materials to teach primary and secondary school students about Japan's history, art and culture. Different works from artists including Katsushika Hokusai, Tawaraya Sotatsu and Ogata Korin, have been selected every year since, with the work most recently donated as the Project's 58th facsimile.