Broadcast television lenses are attached to broadcast television cameras used in the production of such content as TV programs. Various types of lenses are utilized depending on the use case. There are compact and lightweight portable zoom lenses that are easily portable and can be carried on the operator’s shoulder, used to produce dramas and report the news on-site. There are also large, box-shaped field zoom lenses that are secured by a tripod and used to film outdoor sports such as golf and baseball.
Most of the lenses used for broadcasting are zoom lenses, ranging from ultra-wide-angle 14x lenses to ultra-high-power lenses with a magnification of 120x or higher. Lenses used for broadcasting have various angles of view and magnifications depending on the application. The interior of the lens body contains various types and shapes of lens elements that help provide a high image quality. The lens body also includes features designed to meet the high demands of professionals, such as an optical mechanisms to stabilize framing. 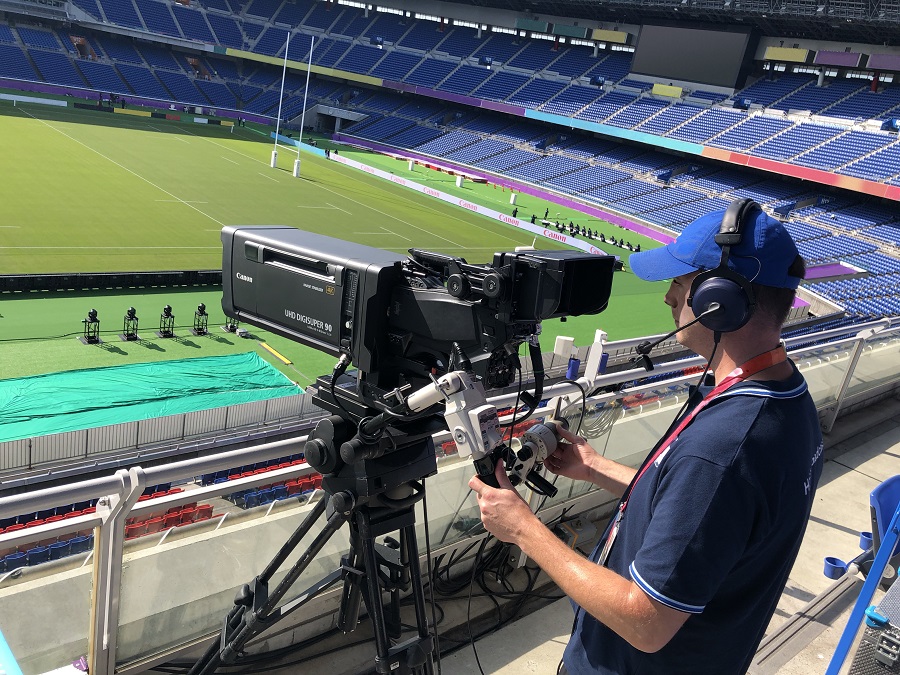 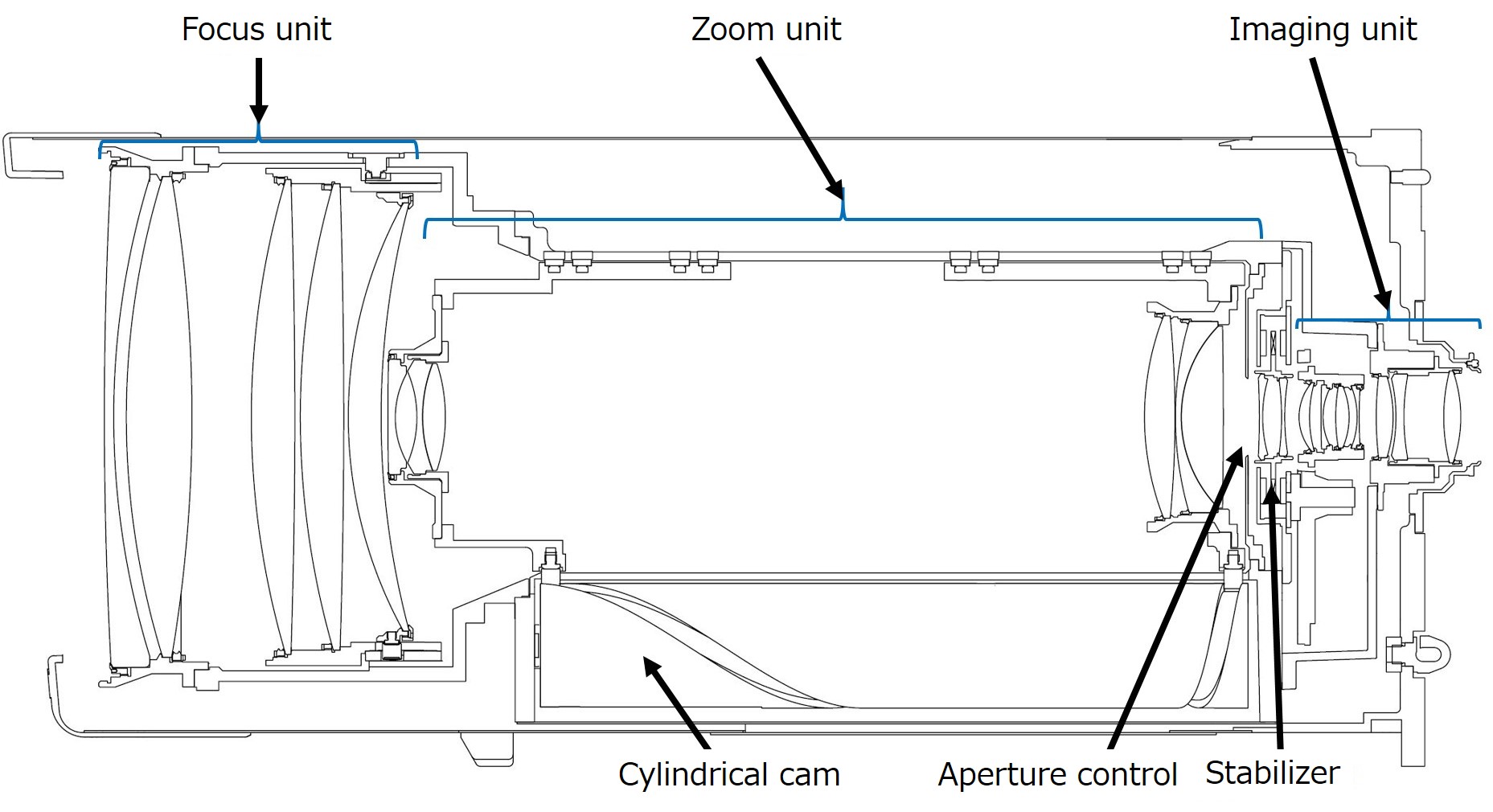 Diagram of components in a broadcast television lens

Broadcast television lenses include a focus unit to focus on the subject, a zoom unit to change the focal length from wide-angle to telephoto, aperture control to adjust the amount of light, and an imaging unit to produce an image on the camera sensor. Each of these parts is designed to provide both easy operability and high optical performance to produce images as intended by the videographer, and these parts require high-precision mechanisms and controllability. In addition, they also require highly reliable technology to provide consistent image quality in any environment.

Canon launched its first field zoom lenses for TV cameras in 1958. Since then, the company has continued to provide broadcast television lenses that deliver high image quality and operability for professional video production while communicating closely with broadcasters and producers around the world.
Video resolution has continued to increase in recent years. Ultra-high-definition television (UHDTV), which was first broadcast in Japan in 2018, provides high-resolution video of 3,840 x 2,160 pixels for 4K and 7,680 x 4,320 pixels for 8K, which are respectively 4 times and 16 times the number of pixels in conventional high-definition television (HDTV). Canon’s broadcast television lenses support high-definition video with a high optical performance compatible with 4K and 8K. 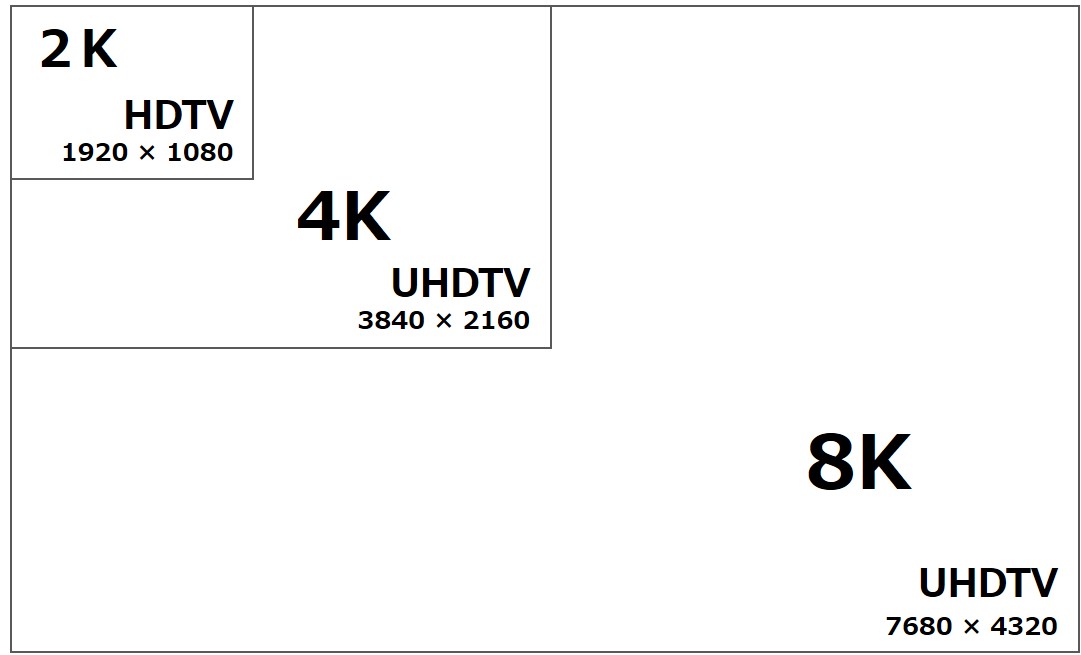 Canon’s zoom lenses, which help produce dynamic video, are particularly well regarded, and Canon has been a pioneer in the development of 8K solutions, including 8K-compatible broadcast television lenses.

Canon has succeeded in developing the first 51x zoom lens for 8K systems through the evolution of its proprietary optical design and high-precision manufacturing technologies, including optimized configurations of fluorite and UD lenses. Aberrations are corrected as much as possible throughout the entire zoom range, from wide angle to telephoto, providing natural and high-quality imaging performance. From a practical standpoint, the lens is as compact, lightweight, and easy to operate as a 4K-compatible zoom lens.

Canon’s proprietary optical design technology has been used to provide the same operability and compactness as in conventional HDTV zoom lenses, while at the same time attempting to correct aberrations for 4K compatibility. By continually requiring ultra-high precision in the processing and assembly of each individual component, Canon has provided high optical performance across the entire zoom range, from the center of the screen to its periphery, in order to provide the high-quality resolution and contrast suitable for 4K images.

Fluctuating aberrations caused by zooming and focusing are suppressed through use of a multi-group zoom system and a floating focus system. Moreover, the use of fluorite and UD glass and their optimum placement enable excellent correction of axial and transverse chromatic aberrations, resulting in a high level of aberration correction suitable for 4K. The result is a beautiful, natural-looking image with little coloration in the contours and excellent resolution all the way to the edges of the screen.

In high-dynamic-range video production, ghosting and flare are more noticeable than ever before because video can now be filmed in bright and dark areas that were previously marred by whiteouts or blackouts. Canon’s 4K lenses are designed to minimize ghosting and flare by shading the inner surface of the lens holder, configuring it to avoid ghosting, and optimizing its coatings, thereby helping to produce clear video with multiple color gradations that maximizes the characteristics of HDR video.

The pixel size of 4K is half that of HDTV, which means the accuracy of focus adjustment is even more vital. Canon’s 4K zoom lenses for broadcast television are equipped with a high-resolution encoder to provide the high-precision focusing required for 4K shooting.

Canon’s world’s first* 122x zoom lenses are highly favored by the broadcast and video industries for their superior optical performance and high reliability as top-of-the-line broadcast television lenses. Using proprietary optical design technology, Canon has provided optical performance that makes the most of 4K by optimally arranging optical elements such as newly developed glass materials, extra-low-dispersion glass, fluorite, and large-aperture aspherical lenses. An optical shift image stabilizer, which enables switching of stabilization characteristics depending on filming conditions, has greatly improved performance over conventional HDTV field lenses, while at the same time significantly reducing oscillation caused by panning or tilting. The technology has evolved to enable framing as intended. 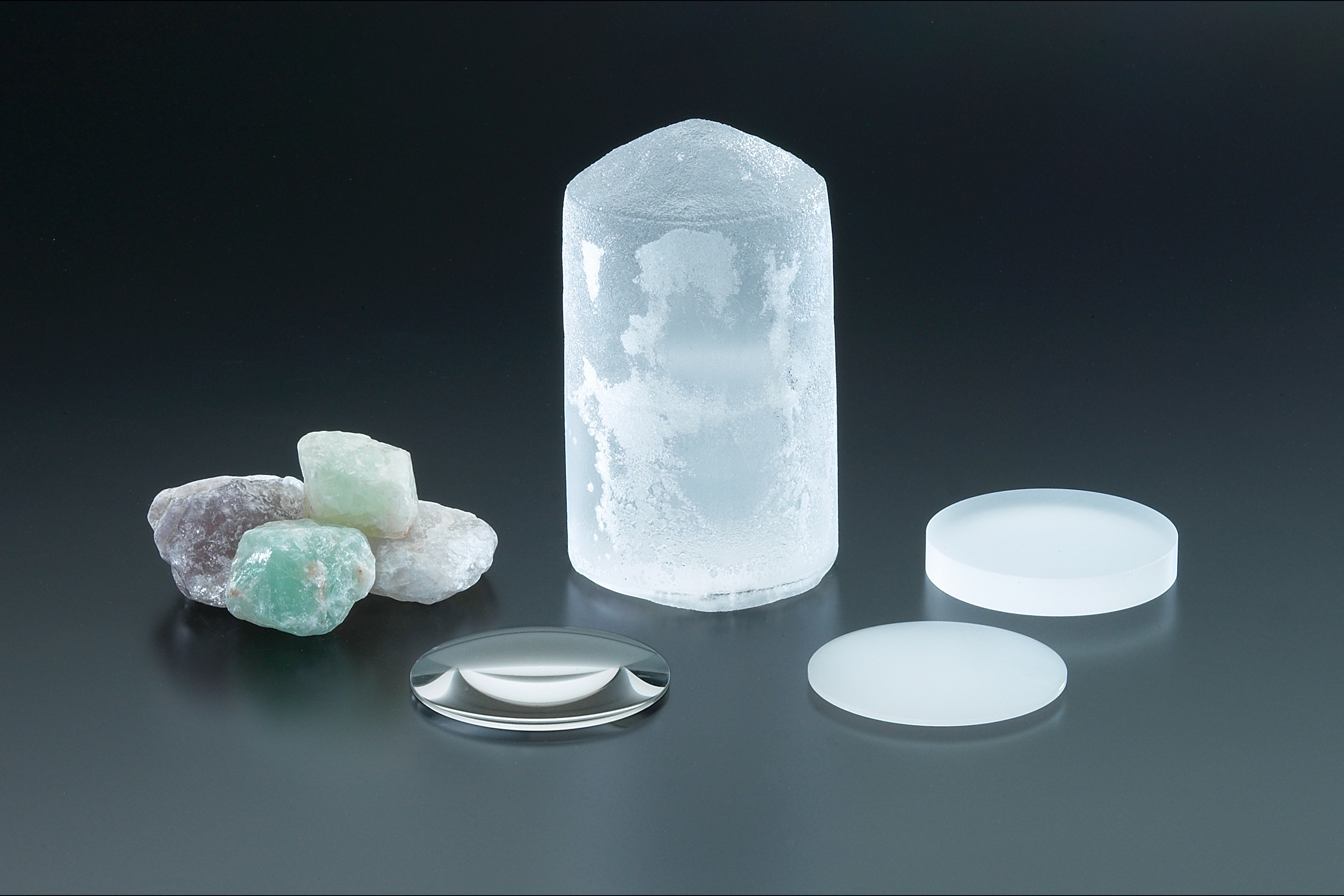 Early on, Canon realized the effectiveness of fluorite, which has anomalous dispersion properties not found in optical glass, and developed a proprietary technology for synthesizing large, high-purity artificial fluorite crystals from fluorite ore. In 1969, Canon released the FL-F300mm F5.6 telephoto lens, the world’s first consumer telephoto lens to use fluorite lens elements. Canon then went on to make the use of artificial crystals in large-aperture lenses commercially viable. 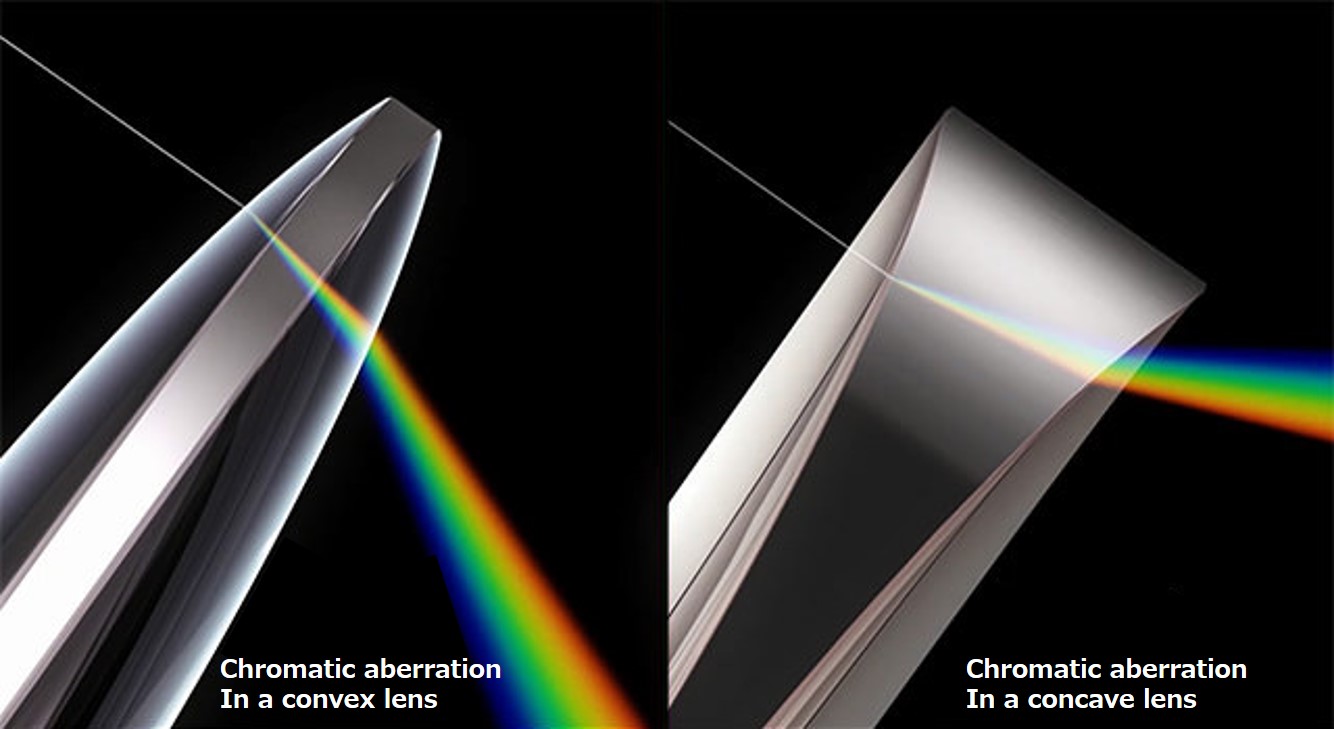 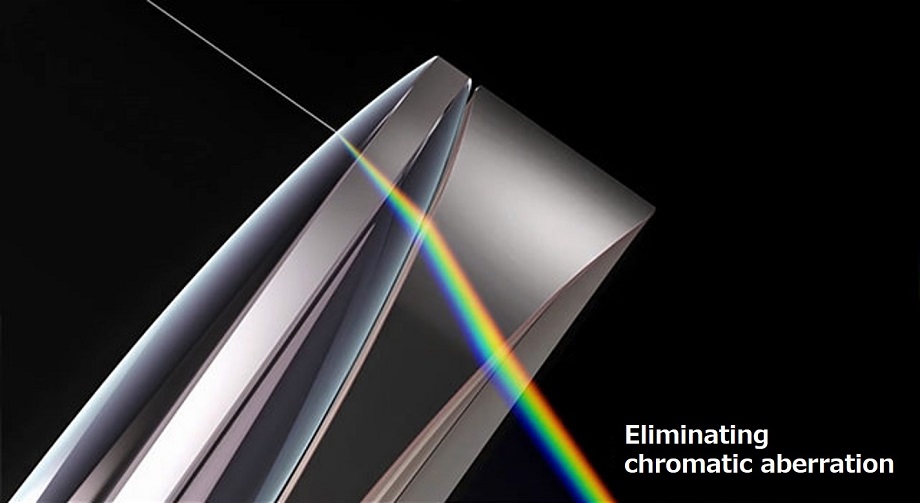 In addition to chromatic aberration, there are five other known types of aberrations in lenses (known as Seidel’s 5 aberrations): spherical aberration, coma, astigmatism, curvature of the image, and distortion. Spherical aberration, for example, is a phenomenon in which light passing through the edge of the lens converges closer to the lens than light passing through the center of the lens, resulting in a blurred image. Spherical aberration inevitably occurs with a single spherical lens element, and it was for this reason that aspherical lenses were developed. An aspherical lens has a surface that is not spherical but curved, with the curvature changing slightly in the radial direction. This design helps suppress aberration. In the past, optical equipment required a combination of several lens elements to correct for spherical aberration. However, with the advent of aspherical lenses, the number of lens elements can now be greatly reduced. The larger the aperture of a lens, the greater the aberration tends to be. Similarly, the larger the aperture of aspherical lens, the greater the effect. Therefore, a larger aperture is one of the best ways to both improve optical performance and reduce the size and weight of lenses. However, broadcast television lenses require extreme precision. Machining accuracy must be dramatically improved when producing aspherical lenses for broadcasting. Through its ongoing development of high-magnification field zoom lenses, Canon created a large-aperture aspherical lens surface, new optical design technology and large-aperture processing technology to both improve optical performance and reduce the size and weight of its lens products. As a result, high-magnification field zoom lenses released after the “XJ86x9.3B (released in 2000)” have a nearly constant overall body length, regardless of zoom ratio. 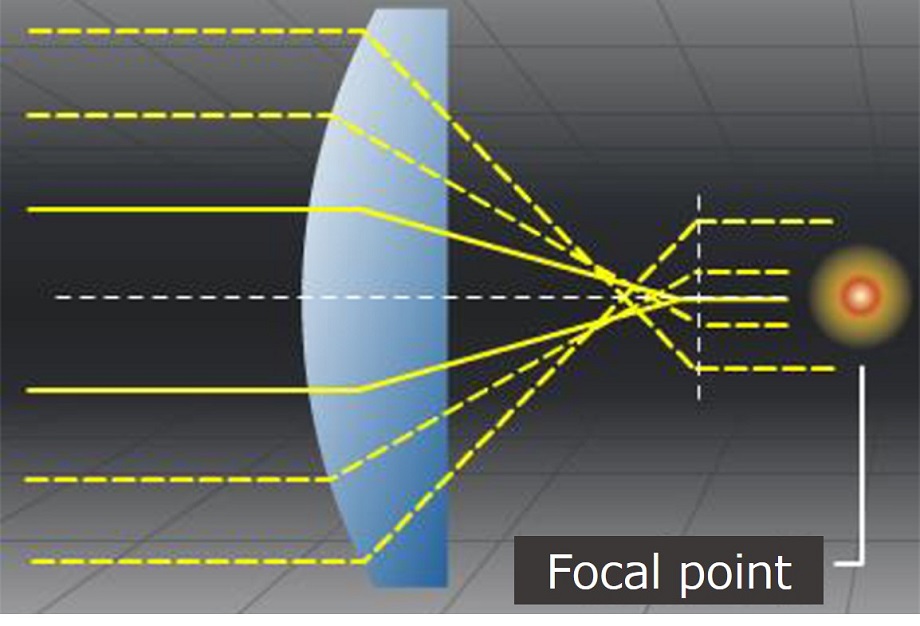 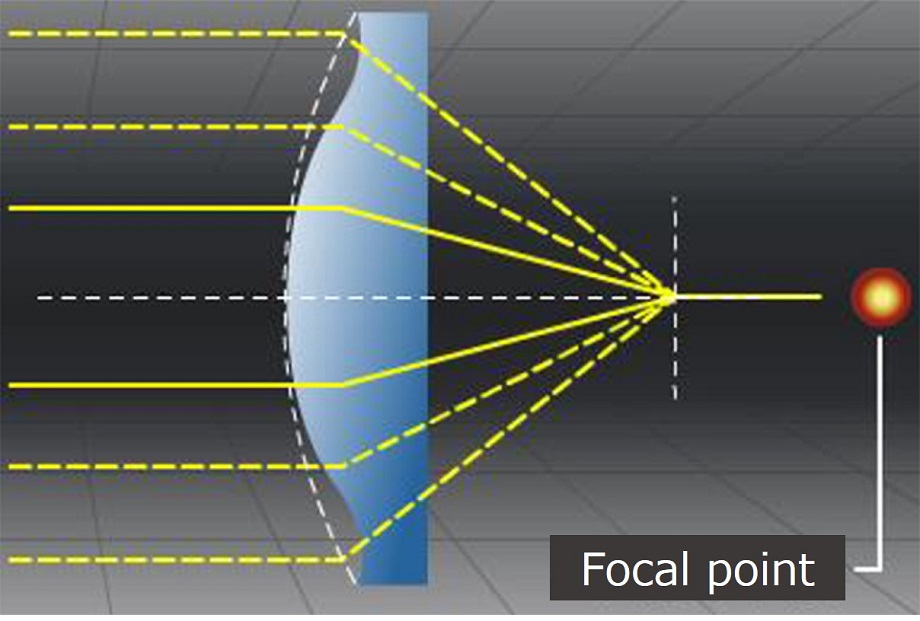 Canon was an early adopter of the inner focus system, which improves the optical performance and operability of broadcast television lenses. This has resulted in a shorter MOD* for studio and field lenses, a wider angle of view, reduced fluctuations in chromatic aberration caused by focusing, and reduced distortion. A lightweight focus lens group also enables low power consumption and high-speed operation. In addition, a portable lens allows the attachment of a rectangular hood, which reduces ghosting and flare, and eliminates filter rotation, resulting in effective filtering.

*MOD: the minimum object distance of a lens

In 2000, Canon became the first company in the world to launch a field zoom lens for broadcast television equipped with a lens-shifting image stabilizer*1. When shooting in the field at telephoto focal lengths, wind or vibration of the camera stand can be an obstacle. However, this mechanism, works in conjunction with a VAP*2 image stabilization system to significantly suppresses image blurring caused by wind or vibration of the camera stand, resulting it provides sharp video.

■Lens shifting (Shift-IS)
The optical stabilizer for broadcast lenses is a high-precision, high-performance development of the in-lens image stabilizer, used by its EF lenses for the EOS series of cameras, that has earned Canon its high reputation. The lens-shifting system detects camera shaking using a built-in sensor and shifts a portion of the lens group (corrective optics) perpendicular to the optical axis, thus refracting light rays to cancel out image blur. Corrective optics can be placed inside the lens, making possible a smaller optical system, and is effective even at long focal lengths, making it suitable for high-magnification zoom lenses.

■VAP (VAP-IS)
A VAP*1 is a unit containing a bellows filled with a highly refractive liquid, enabling three-dimensional control of light rays. A VAP is able to handle a wide range of vibration, from low-frequency shaking that occurs when a camera is carried on the cameraman’s shoulder, to high-frequency shaking that presents a problem when a camera is shooting from a vehicle. A VAP also allows a large angle of correction. Canon has also used a VAP in the world's first HDTV portable zoom lens with a built-in stabilizer and a 4K-compatible portable zoom lens*2,3. 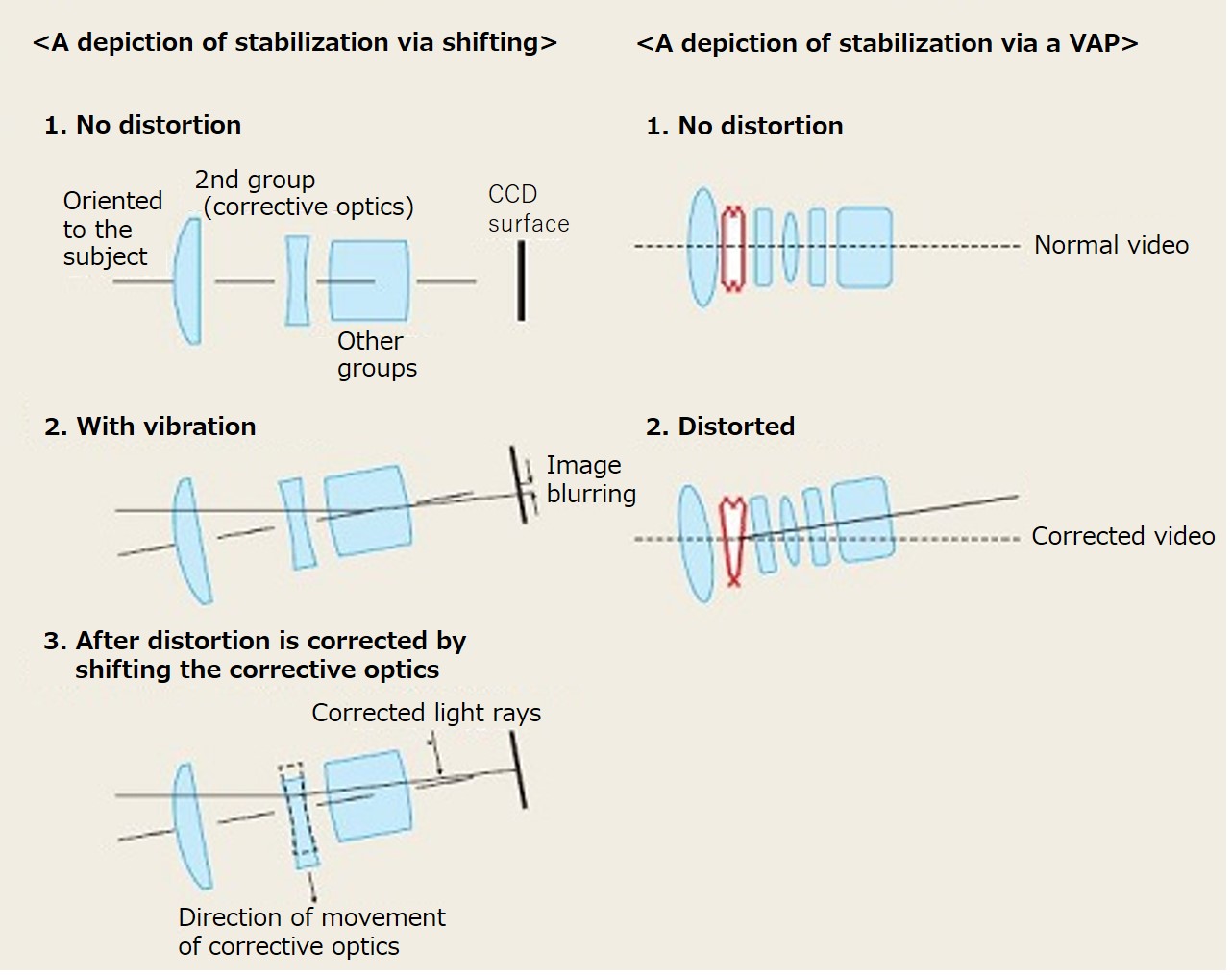 Constant Angle Focus System (CAFS) technology completely eliminates variation in the angle of view (breathing) caused by focusing. When focusing from the background to the foreground, for example, the angle of view changes to the telephoto range. CAFS eliminates this phenomenon, thereby stabilizing framing. The principle is that zooming functions in the opposite direction as the change in magnification caused by shifting of the focus unit, thereby canceling out the effect of that shift on the angle of view. Canon’s DIGISUPER Series provides high-speed, high-precision control with minimal discomfort or delay in focusing or zooming through full use of digital servo technology with a 32-bit CPU and proprietary correction expertise.

Linkage to a virtual studio system

Canon’s broadcast television lenses use a 16-bit encoder to detect and output position information with a much higher resolution than analog position sensors (equivalent to 10 bits). This enables highly accurate and natural composition.

Zooming can be controlled manually or via a servo to automatically track the subject without operating the clutch. Even during servo control, framing can be changed instantly and manually, and flexible zooming can be performed through such means as transitioning from manual operation right to slow zooming controlled by the servo.

The drive unit of the portable lens, which provides excellent operability, is compact and lightweight. The optical axis of the lens is close to the palm of the hand, minimizing discomfort when manipulating the drive unit and reducing fatigue when the camera is held in close while carried on the shoulder. The free-form surfaces of the drive unit that conform to the hand and the placement of rubber finger pads allow for secure grasping. In addition, the large space provided for the focus ring facilitates operation during manual focusing. 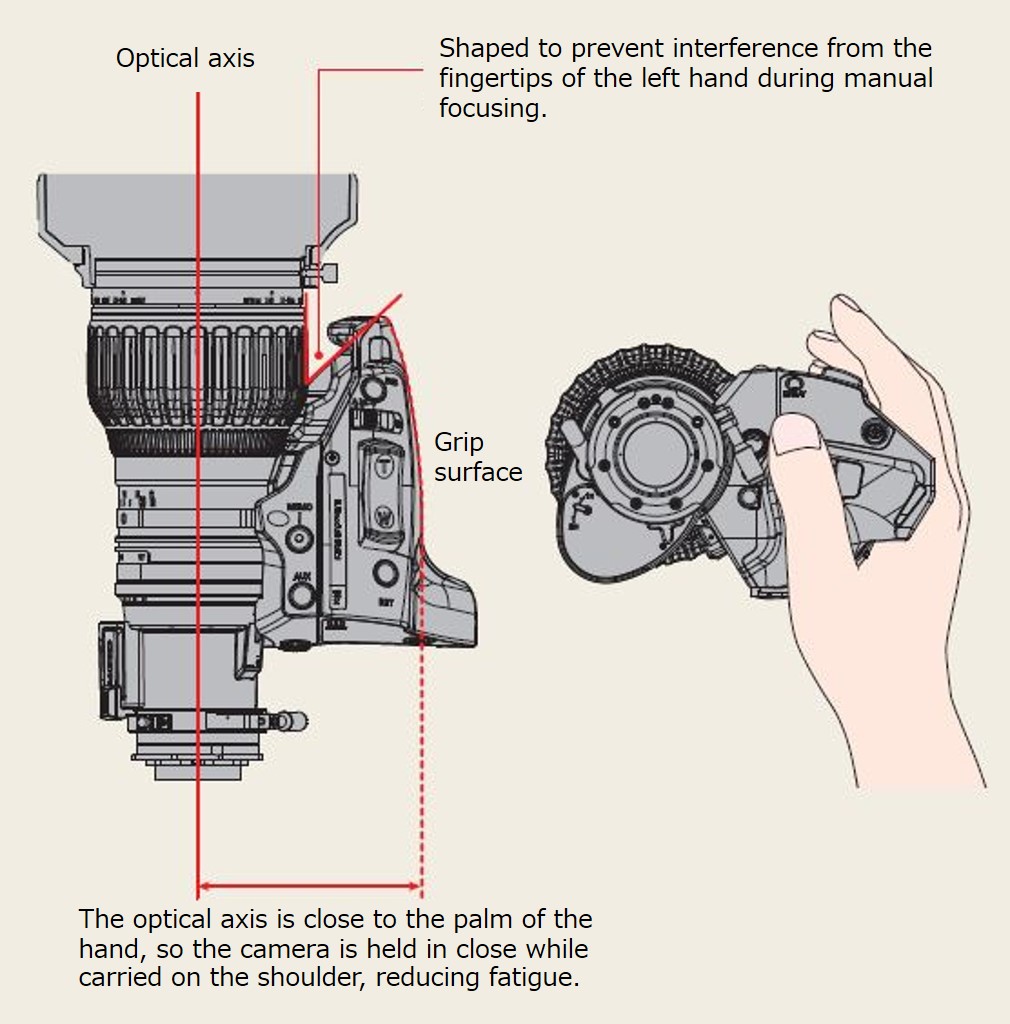